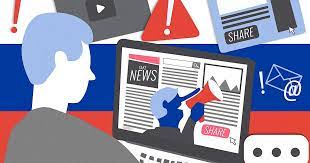 The Russian invasion of Ukraine has been going on for well over a month. Those of us who live in nations with a commitment to free speech and the free press have become accustomed to seeing articles with headlines like “At the Edge of Kyiv, Ukrainians Show Off Their Counteroffensive”, “Putin ‘Misinformed’ by Advisers on the War, White House Says”, and “Russian troops ‘drive tank over commander’ amid anger at high casualties”. Upon reading those articles, the overwhelming majority of Americans choose to believe that the information they provide us with is correct.

More than that, we see a flow of more casual information through the guise of social media that highlights the struggle of everyday life for individual Ukranians, Russia’s targeting of civilian buildings, and even the resistance music that plays on radio stations in Kyiv. This further validates the information we receive from traditional media outlets.

Many Russians, and countless other individuals who do not have their right to free speech and a free press actualized are not granted access to this information- instead, citizens of repressive countries are stuck tuning in to state media for most of their information. In Russia this media diet consists of the state television channel Rossiya, well known (but scarcely trusted) sources like Russia Today and Sputnik News, and whatever scatterings of international media can weave their way through the various censorship blacklists that have restricted the content that Russians can consume both online and through their television screens for well over a decade.

VPNs and apps like Telegram provide greater access to Russians who use them, but doing so comes with legal risks. More than that, these people make up a small portion of the Russian population and are overwhelmingly young and urban. Many of them, presumably, are already in jail for demonstrating against the war.

The West often misunderstands the purpose of Russian disinformation both in how it shapes political discourse in Russia and how it impacts the larger world. The goal is not to persuade Russians that the Kremlin cannot tell a lie, nor is it to completely censor all narratives that might push back against the Russian position. Frankly, individual Russian citizens are too smart to fall for such obvious propaganda.

Instead, Russians are given the impression of a semi-free media through the occasional sample of some of the West’s most controversial political personalities, “what about-isim”, and the frequent exaggeration of otherwise honest stories. This maelstrom of political repression and half-truths serves to discredit the media in its entirety in the eyes of the Russian people- leaving the Kremlin as the last remaining viable narrator. Similarly, Russian disinformation within the United States is designed much more towards facilitating distrust and political disengagement than it is towards the benefit of one political party over another.

Putin and his crownies know that Russia is too deeply integrated in the international community to pursue a full “Hermit Kingdom” strategy. Putin also knows that the strength of the American free press will make it all but impossible for reasonable Americans to be outright duped by his lies. So, in lue of this, Russian officials have adopted a strategy of sewing confusion and general distrust.

Eventually, the Kremlin hopes that this distrust will turn to disinterest. That the public’s attention will shift away from Putin’s atrocities, and that Ukraine-aligned governments will decide that cheaper gas and grain is more desirable than a drawn out (economic) conflict with autocracy.

What can those of us in the West do to thwart Putin’s efforts? We can continue to pay attention to what is taking place in Ukraine, we can continue to seek out information from a broad range of sources, and we can inspire our fellows to do the same. More than anything else we can keep the pressure on elected representatives and media outlets alike to shine a light on these critically important issues.

Putin does not need to persuade you of his lies to win out in Ukraine, all he needs you to do is stop caring.