Amphibious Assault Ship Bataan With 2,000 Marines On Board Is Headed Toward Iraq

The Iraqi parliament voted on Sunday to expel US troops out of the country but so far, it appears that nobody in the US got the memo. In fact quite the contrary.

According to the US Naval Institute, amid rising tensions with Iran, the US Navy is scrapping an exercise with Morocco as it redirects the amphibious assault ship USS Bataan (LHD-5) and embarked 26th Marine Expeditionary Unit with roughly 2,000 marines on board to the Middle East, a defense official confirmed to USNI News.

182 people are talking about this

Members of the 26th MEU and Bataan crew were slated to train with members of the Moroccan military as part of the joint Exercise African Sea Lion. Indeed, the Bataan Amphibious Ready Group had just arrived off the coast of Morocco this week before its new tasking, according to the USNI Fleet tracker. The ARG deployed quietly from the East Coast in December. Now, Bataan and the 26th MEU are moving closer to the Middle East, as shown in the most recent map of naval deployments. 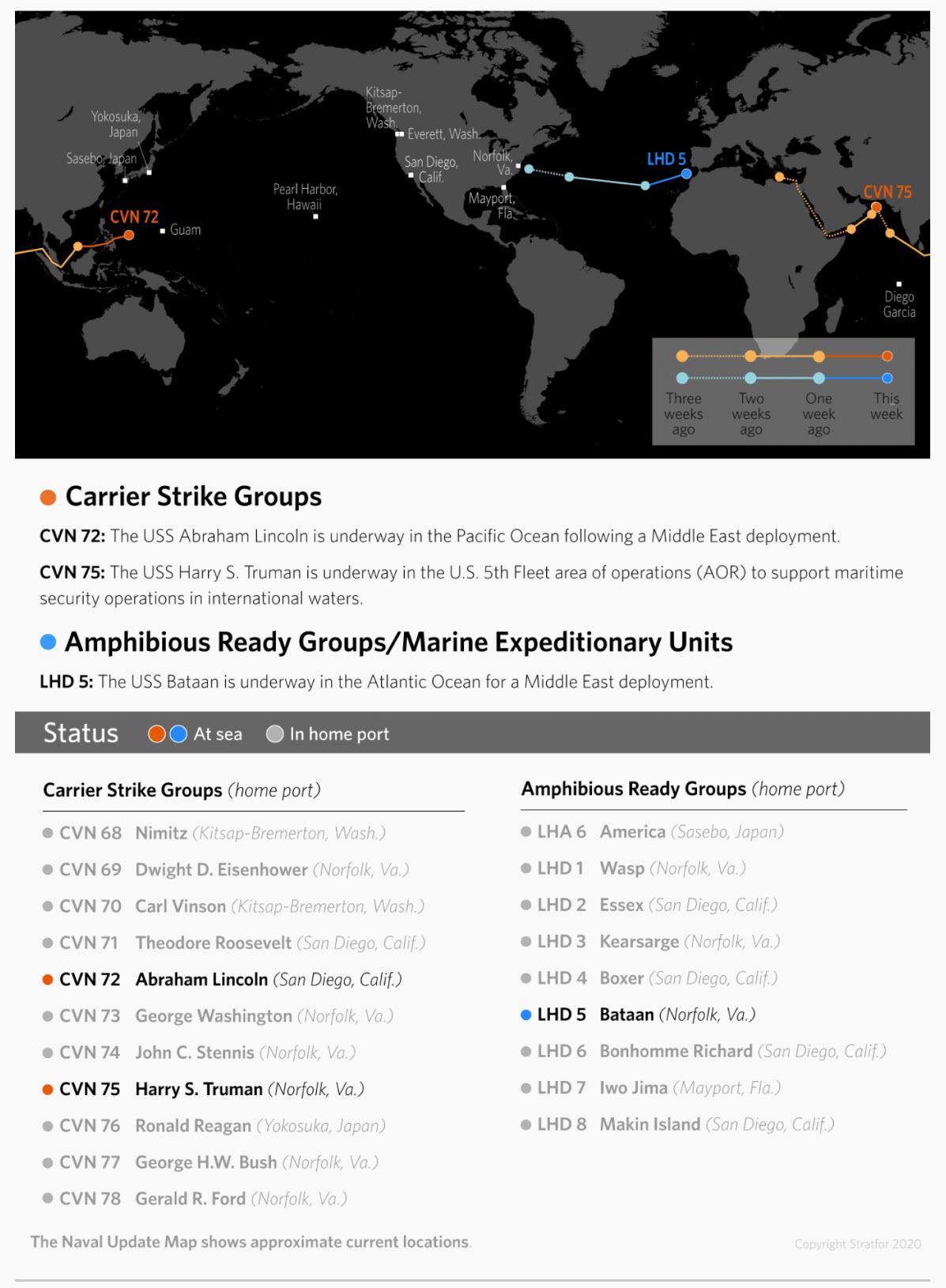 The 26th Marine Expeditionary Unit—a force of more than 2,000 Marines, including infantryman, artillery and aircraft—is expected to pass through the Suez Canal within days, U.S. officials said. On board the USS Bataan, an amphibious assault ship, the force could be put ashore for combat operations and also specializes in protecting and evacuating embassies.

“It is Written” May you NOW SUCUMB to the Mighty HAND Of Ephraim & MANESSAH from the WEST. Their Archers & Warfighters- THESE, the “flame & the tip of the arrow: JOSEPHS’ SONS/SEED THROUGH ISAAC, THE ANGLO SAXON PROMISE !!!

The Marines will join soldiers from the Fort Bragg, N.C.-based 82nd Airborne who have been sent to Iraq as a security measure following the U.S. operation that killed a top Iranian military leader on Thursday. In total when the 5,000 sailors and marines from the Bataan arrive in Iraq, the US will have added roughly 10,000 troops in Iraq in the last week.

When the USS Bataan, carrying 5K sailors and Marines, arrives, the U.S. will have added roughly 10K troops to Iraq in the last week. https://www.wsj.com/articles/iraqi-parliament-decision-to-expel-u-s-forces-is-hampering-american-led-operations-against-islamic-state-11578270282 … via @WSJ

If carried out, an expulsion would deprive the U.S. of bases to conduct operations against Islamic State in Iraq and make it harder to provide logistical support to hundreds of U.S. troops still in…

139 people are talking about this

The deployments come just the Iraqi parliament voted to expel US forces operating in the country. In response, on Sunday the U.S. Central Command said it had suspended, at least temporarily, efforts to train Iraqi forces and help them fight Islamic State extremists.

If expelled from all of Iraq, the U.S. would still be able to do airstrikes from bases outside the country and carry out covert raids. But that would be much less effective than operating on the ground in concert with Iraqi security forces against Islamic State militants, who still number in the thousands and are striving to rebuild their capabilities following the loss of their self-declared caliphate.

“If the final Iraqi decision means all U.S. troops have to come out, it would effectively end the U.S. capability to deal on a moment-to-moment basis with fleeting targets,” said retired Marine Corps Gen. John Allen, who helped organize the international coalition of more than 70 countries, a handful of which have played an active role in Iraq and Syria in helping local partners fighting Islamic State, also known as ISIS.

Loading...
"Not by might, nor by power, but by my spirit, saith the Lord of hosts." Zechariah 4:6
Read it..
BEFORE IT'S NEWS
SIGN UP FOR OUR NEWSLETTER
Today's Top Stories
Q News - Martial Law! What Aren't They Telling Us Regarding the Secret Takeover? - Great Video!
Robert David Steele: Extraterrestrials, Restore Paranormal Abilities, Free Energy, GoogleGestapo, Surveillance Capitalism and Web 3.0
Breaking: Military to Jam GPS Signals Across East Coast Through Jan. 24th - FBI Asserting Imminent Domain to Seize Night Vision Devices From Distributors! +Video
Behaviors Adults Adopt Who Have Experienced Childhood Emotional Abuse (Videos)
Trump Lies His A$$ Off to Advance Nuclear Conflict/NWO Genocide
POTUS Has Negated Governor Northam of Virginia! Great Dave Hodges Video!
What Are They Hiding? Why Aren’t More Doctors Prescribing Oxygen? (Video)
Breaking: Democrats Conspiring to Stage False Flag Bloodshed on Jan. 20th in Virginia! “Charlottesville 2.0” – In Order to Ignite a Civil War & Mass Chaos! +Video
Dave Hodges & Bob Griswold (1/17/2020): Virginia Gun Confiscation is Designed to Become the Pretext for Civil War! and Much More...
Breakthrough for Vaccine Laws! Vaccines Cannot Be Lawfully Forced Upon the People! People Not Government in Charge of Constitution!
Loading...
Featured
Facts About Lucid Dreaming & Tips For Inducing One
Virginia 2nd Amendment Rally – Updates and Inside Information
POTUS Has Negated Governor Northam of Virginia! Great Dave Hodges Video!
The Untouchable: The Slow Fall of a Hollywood Heavyweight (Videos)
Trump Lies His A$$ Off to Advance Nuclear Conflict/NWO Genocide
After Investigating 1,000 Near Death Experiences, This Author Came To The Conclusion That Life After Death Is Very Real
Open Carry Transforms into Open Tyranny in Virginia as Judge Rules Second Amendment Null & Void in State Capitol
Operate Eliminate 2nd Amendment Movement! A Special Report on the Covertly Sabotaged Virginia Gun Rally!
Jesse Ventura: WW3 Iran Is Out for Blood - We've Been Itching for a War With Iran
X22Spotlight Report: The People Control Change, Cannabis Is Just the Beginning! Penny White Video