Defund and redirect is pretty much the same thing

Fact Check: ‘Redirecting’ Police Funding is the Same as ‘Defund the Police’ 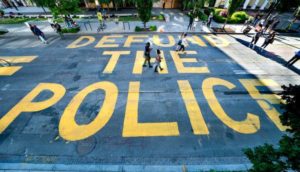 CLAIM: Joe Biden doesn’t want to abolish or defund the police; he just wants to redirect police funding to other uses.

Fox News’ Chris Wallace generated buzz on Friday afternoon with the release of a clip from his White House interview with President Donald Trump, which will air in full on Sunday.

Wallace “fact-checked” Trump’s claim that Biden wants to abolish or defund the police: (tweet of the discussion between Trump and Wallace)

Trump was incorrect about the “Biden-Sanders Unity” platform, which did not discuss defunding the police.

Moreover, the Biden campaign has said since June 8 that he opposes “defund the police.”

However, Trump correctly stated that many Democrats do wish to defund — or abolish — the police, and have taken steps to do so in many Democrat-run cities.

Many Democrats have attempted to protect the unhinged BLM and their “non-black allies” who are calling to 100% defund police departments by saying that they mean only that some of their budget should be moved to other priorities. Some, such as Los Angeles, Seattle, and NYC have actually gone this direction.

While Biden has said he does not want to “defund the police,” he has also said, as The Hill notes, that he wants to “re-direct” funding from policing to other priorities, like mental health, which some on the left have argued will be more effective in preventing crime.

This is also what some activists have tried to explain “defund the police” actually means.

The Brookings Institution, a left-leaning think tank, explained last month: “‘Defund the police’ means reallocating or redirecting funding away from the police department to other government agencies funded by the local municipality. That’s it. It’s that simple.”

So when Biden claims he wants to re-direct police funding, that is what “defund the police” means to many Democrats.

Exactly. Handsy Joe has avoided the phrase “defund the police”, while holding the same policy with “re-direct funding.” That’s part of the reason why the National Association of Police Officers has now endorsed Trump/Pence, after endorsing no one in 2016 and endorsing Obama/Biden in 2008 and 2012

NAPO has endorsed President Trump in his reelection campaign. Here is our endorsement letter which was issued following today’s meeting. pic.twitter.com/mf6ZUTf10l