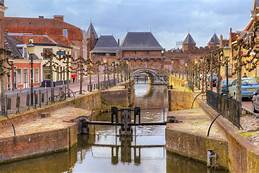 In addition to the previously-reported rioting in The Hague, there was also a riot in the Dutch university town of Utrecht Friday night. (It had nothing to do with the university.) According to NOS News (NL) 250 rioters were involved and 18 arrests were made. My Dutch sources inform me that rioters are primarily Moroccans. The below article in De Telegraaf is translated by Fousesquawk.

Riots in Kamaleneiland (neighborhood), Youths throw fireworks bombs
Utrecht-Riots broke out Friday evening  in the Kanaleneiland neighborhood in Utrecht. In social media, including Snapchat, you can see how a bus stop was destroyed. Fireworks bombs were also thrown, and cars and scooters drove through the streets honking their horns.
Around midnight, police blocked  the area, and a mobile unit began sweeping the streets It is unknown if arrests were made. Around 1 am, by use of a loudspeaker, police announced an emergency order was in force and that anyone still on the streets would be arrested.

A resident of Kanaleneiland could see the rioting youth from her living room. “On Thursday, I saw a call on Snapchat in which they said they wanted to surpass the Hague. Well, it worked. The Hague has been surpassed. I didn’t know it would be so (violent).”

According to her, the rioters began around 8:30 pm. “I am in shock how many people there were. Every 15 minutes, you hear firework bombs. How can that be when the police are present?” The police won’t say more than there is unrest in Kanaleneiland. “There are many youths on the street; there is unrest and vandalism.” As to how many youths there are, a spokesperson cannot say.

It was further reported that a car was set on fire. “There was a car fire, which was put out by the fire department.”