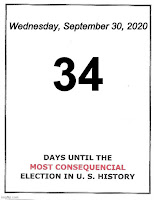 THE U.S. economy runs on fossil fuel. There is an abundant supply. It is relatively economical. The Democratic Party believes that man is the primary cause of global warming/climate change (see the Day 43 post) using these God-given resources. The Republican favor the use of current energy resources and reject the idea that mans use of fossil fuels is the primary cause of change in climate.

Yesterday we talked about employment (see the Day 35 post). The energy sector generates many jobs. Oil fields, fracking, refining, transporting all are labor intensive. The Democrat in seeking to do away with all use of fossil fuels propose to convert those jobs into “Green” jobs. Manufacturing and maintaining wind turbines, solar panels and an infrastructure to integrate these alternatives into the current grid does not seem feasible or economical. I do not see being able to create enough “Green” jobs to offset the loss of jobs in the current energy sector.

If they did succeed in converting the country over to alternative energy sources rolling blackouts and energy shortages would probably be a regular occurrence. Then there is the cost on creating an infrastructure to support “Green” energy. The taxpayers and not private industry will be footing much of the bill with massive subsidies. The nation is already in a deep whole when it come to our national debt (see the Day 45 post).  We are talking trillions of dollars if Harris-Biden and the rest of the communistic Democratic Party gains control of the government.

For the first time in many years the United States is a net exporter of oil instead of being dependent on Arab oil. We are energy independent. Why mess with success?

The Trump Administration has allowed the Keystone XL pipeline to be built, but the project has run into legal problems. A Wikipedia entry regarding the legal case involving an environmentalist group states that on “July 6, 2020 In the US Army Corps of Engineers v. Northern Plains Resource Council case, the Supreme Court of the U.S. ordered all Keystone XL work be halted. The order, however, does not affect any other present or future pipeline construction in the United States, and will be in force until the circuit court, and then the Supreme Court deliver their final rulings. In response, TC Energy stated that the US part of the project will be reassessed (but not abandoned); the Canadian part will proceed as before.” The pipeline project creates one well-paying jobs.  The opposition to the pipeline maintains that the project will negatively impact climate change.  This is highly debatable.

In the same way environmental groups are also battling the fracking process. Fracking has been a real boom to the economy of Pennsylvania and other states. Earlier this year the Hill reported in “Court OKs Trump repeal of Obama public lands fracking rule” that “a federal judge upheld the Trump Administration’s decision to repeal an Obama-era rule that established standards for hydraulic fracking on federal land.”

The Democrats are all in for Climate Change and see a “Green” future. The more realistic Republicans see energy independence and support of our manufacturing industries and high priorities to sustain America’s position as a global economic leader.

Vote Democrat if you want the inconvenience that will accompany environmental extremism and climate alarmism policies if allowed to come to fruition. Vote Republican if you want to see a vibrant economy, job creation, cheap energy and lower taxes.