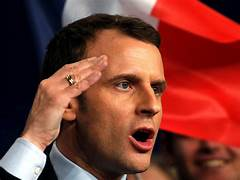 This week, French President Emmanuel Macron met with several Muslim religious leaders at the Elysee Palace in Paris. Macron is putting pressure on France’s leading Islamic organizations to recognize French values, the principle of secularization in France, and that Islam in France is a religion-not a political movement. Macron is also trying to bring more supervision over the training of imams and eliminate foreign influence on imams in the country.

The below article from France 24 is translated by Fousesquawk.

Islam in France: The CFCM presents Emmanuel Macron a council of imams project

The French Council of Muslim Worship (CFCM) was received by Emmanuel Macron at the Elysee Palace Wednesday. At the request of the President, its leaders proposed to him a national council project responsible for supervising the training of imams in France.

The leaders of the French Council of the Muslim Worship presented Emmanuel Macron Wednesday, 18 November, with a project of a national imams council. The head of State had asked them to create a body responsible for designating imams in France, stated the Elysee (Palace).

The chief of State has also asked them to write up, in collaboration with the Ministry of Interior, a “charter of Republican values”, upon which the CFCM and the 9 federations that make up (the CFCM) will commit themselves.

He gave them two weeks to come and present this charter to him, stated the Elysee, confirming the information from Le Figaro and Parisien.

This charter, the President requested, must affirm the recognition of the values of the Republic, specifying that Islam in France is a religion and not a political movement, and stipulates the end of interference or affiliation with foreign nations.

The objective is specifically to put an end, within 4 years, to the presence in France of 300 foreign imams, (sent by) Turkey, Morocco and Algeria.

Since his speech on separatism and radical Islam at the beginning of October, and again after the murder of Samuel Paty and the Nice attack, the chief of State increased his pressure on the governing bodies of Islam in France to fight against foreign influence, radicalization, and political Islam.

On Wednesday, he received the leaders of the 9 federations that compose the CFCM for the fourth time since the start of the school year, according to the Elysee Palace. The president let them know that several of these federations are taking ambiguous positions on the subjects discussed and that they need to stop these ambiguities.

Among these 9 federations, representatives of one large part of the Muslim religious community, three of them, do not have a “Republican vision”, like Milli Görüs, a Turkish (national), and the Muslims of France, (formerly -UOIF-Union of Islamic Organizations in France), the Elysee palace revealed. ” If some of them do not sign this charter, we will draw the consequences,” the president warned, who “took note of their proposals”.

The council of imams, presented as a sort of council on the order of the model of that of lawyers, would not only be able to designate imams and give them an official card- presently, no designation is necessary, and it is possible for one to proclaim himself an imam- but also to withdraw approval in case of a breach of the charter and a code of ethics, that it will have to draw up.

The President gave the CFCM 6 months to implement a training framework for imams.

Depending on their role (imams directing prayer, preaching imams, and conference speaking imams) different levels of knowledge of French and diplomas, up to university training, will be (required). The council will have to bring current imams into this model.

The membership of CFCM in this new Muslim religious organization in France would mark a victory for Emmanuel Macron, target of sometimes violent criticisms from Muslims in several countries for his remarks on an Islam “in crisis” and his words against radical Islam.

Aside from the calls for a boycott of French products, the French president, who rejects any accusation of being anti-Muslim and defends a neutral secularization vis-a-vis all religions, has himself personally become the target of jihadist threats.

It sounds good, but only the actions and results can be judged. Macron bears a lot of responsibility as president for the dangerous situation in his country. That also extends to his predecessors as well. Since the recent attacks in France, it appears that Macron is taking a harder position, and he has incurred vicious attacks and threats from the Muslim world. It will not be easy to get French Muslim leaders to abandon the political aspects of Islam, which are deeply embedded in Islamic teaching. In the West, however, this should not be a point for negotiation. As noted above, stopping the influence of foreign imams in France is an important point. Importing imams from countries like Turkey and Saudi Arabia is a recipe for catastrophe. In addition, organizations aligned with radicals, terrorists, and bodies like the Muslim Brotherhood should be shut down.