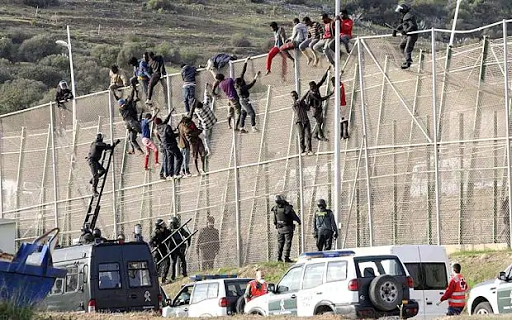 On January 28, 2021, the Spanish program, La noche en 24 horas (The night in 24 hours) featured an interview with Javier Ortega-Smith, secretary-general of the Spanish political party, VOX, a conservative party that stands against Catalan separatism and mass migration into Spain. Two issues were discussed. First, on the day that the election campaign started in Catalunya, Twitter placed VOX’s account under suspension. The stated reason was a tweet that VOX had put out to the effect that immigrants made up 0.2% of Spain’s population, but accounted for 93% of reported crimes.

The latter point was disputed by the program’s moderator, Diego Losada, who produced conflicting numbers from a national statistics agency as well as from Catalan police. This led to a long discussion as to how the statistics are tabulated, whether they were talking about naturalized immigrants vs the migrants coming from North and Sub-Saharan Africa,  legal vs illegal migrants etc. Among all that discussion, Ortega-Smith made some very salient points about how social media giants like Twitter are deciding who can publish what and who cannot.

Here is the segment of the interview in question as translated by Fousesquawk. Note that the sub-titles begin a few seconds into the segment since the first few seconds are the lead-up to this topic by the moderator. In addition, the last several seconds of the segment are not sub-titled since the moderator is transitioning to a separate topic, and he and Ortega-Smith are talking over each other.

I should add that the leftist media, which opposes VOX, has jumped all over Ortega-Smith maintaining that Losada destroyed him on the point of the statistics mentioned in the VOX tweet. Of course, like Losada, they ignored every point that Ortega-Smith made about social media censorship especially during an election.

As shown in the video, Here is the portion of the tweet by VOX that caused the furor: (Translation by Fousesquawk.)

“Suponen aproximadamente un 0.2% y son responsables del 93% de las denuncias. La mayoria son precedentes del Magreb.” (They make up 0.2% and are responsible for 93% of (reported crime). The majority are from the Maghreb.

The Maghreb refers to North Africa.

As to the dueling statistics, I have no idea what is accurate since I don’t live in Spain. I would guess that the number of legal immigrants in Spain is higher than 0.2% and that those immigrants do not account for 93% of the reported crimes. On the other hand, it seems clear from following the news that the illegal migrants who are landing on the shores of Spain’s coast and jumping the fence at Melilla and Ceuta are disproportionately represented in crime in the places where they are located. The discussion was centered around Catalunya and the Canarias. Without carefully breaking down the numbers for legal vs illegal and what categories the immigrants fall into, any discussion of statistics can go awry very easily.