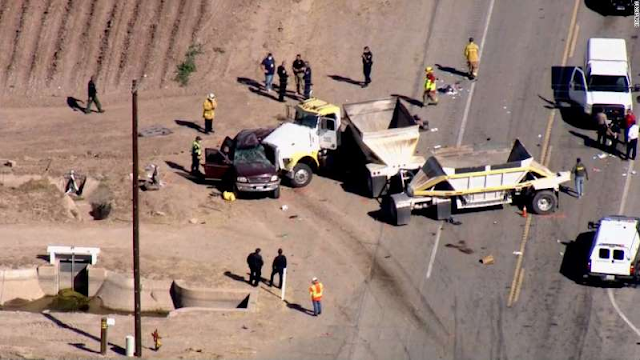 As I write this, we don’t have the full story of the horrific crash this morning in Imperial County, California in which at least 15 people are reported dead. I could be wrong, and maybe it will turn out that this was a traveling circus, but according to news reports, there were 27 people in a SUV that collided with a big-rig truck. Given the location, near the border with Mexico, I am betting the farm that this was a case of transporting illegal aliens from the Mexican border.

Aside from the human tragedy, if this case involves the transport of illegal aliens, it should serve as a wake-up call. We are now seeing the start of another wave of migrants trying to cross our border. Already, the reception centers are being overwhelmed with unaccompanied minors who have been brought across the border by coyotes (human smugglers). Thousands of Central Americans are entering Mexico to begin the trek north to the US. How many of these people will be raped or murdered along the way in Mexico, we have no idea and probably never will know.

It is no coincidence that this wave is being spurred by the accession to the presidency of Joe Biden. The border wall construction has been stopped, and Biden has signaled that he will welcome people into the US with scant regard as to who they are or where they are coming from; Mexico, Honduras, the Middle East, wherever.

But aside from the social and economic harm this will bring to America, we go back to this morning’s accident. An SUV with 27 people inside ten miles from the Mexico border, an area, in fact, with a long history of drug smuggling, tells me that this was no traveling circus. It was a case of people smuggling, and I am saying this before the full news comes out.

The fact is that horrible things are occurring along our border with Mexico, and this has been going on for decades. As a retired Customs/DEA agent, I had occasion to work in that area (Imperial Country), especially during my years with Customs.  These horrible incidents occur due to drug smuggling and human smuggling. President Trump tried to stop it, but the current administration will do little to stop it. As far as the Democrats are concerned, these are people who will be given a pathway to citizenship and soon after, US citizens and Democrats. The current policies under Biden will only encourage hundreds of thousands more to make this dangerous trek. Hundreds more will be murdered or raped, or die of exposure in the deserts of northern Mexico or the SW United States.

It is somewhat similar to the situation in the Mediterranean, where hundreds, if not thousands of Africans and Arabs have drowned trying to make it to Southern Europe. Meanwhile, the EU and its client political leaders in Western Europe do nothing to stop the wave as NGO ships sail the sea picking up the migrants and bringing them to Italy or Spain. Italy’s conservative politician, Matteo Salvini, tried to stop the landings while he served as interior minister in a previous government. For that, he is being prosecuted in Sicily for kidnapping! As things stand now, nothing-not even Covid 19- has been able to stop the invasion and gradual takeover of Europe.

Nor will it stop the wave that will now continue across our own border now that Biden is president. He will open the doors for more so-called refugees from the Middle East and Somalia, and those arriving at our border with Mexico will be admitted-those who make it alive anyway.

Our border with Mexico represents a tragic situation in terms of human lives aside from the harm it brings to our own nation. How sensible it would be to stop the wave. Yes, we need to support reforms in countries like Honduras and Mexico, and we need to get tougher with Mexico, which, frankly speaking, has not been a good neighbor to the US. We need to put pressure on Mexico to close their southern border and stop facilitating the movement of these caravans through their territory. We should recall the outrage of the citizens of Tijuana a few short years ago when their city, already plagued with many problems, was occupied by these caravans trying to get across the border.

These people come because for them, there is nothing in Mexico and Central America (with the notable exception of Costa Rica). Until these countries reform, people will look to the US for a better life. Most are decent people, but for the criminal organizations in these countries, the US is also a “land of opportunity”.

We need to institute policies whereby these people are made aware that if they come illegally, there will be nothing for them in the US. Of course, I am now speaking wishfully because under the new administration, nothing like this will happen. It’s now already taking a turn for the worse. And as we most certainly have seen today, there will be more deaths just a few miles north-and south of the US-Mexico border.