Hat tip The Religion of Peace 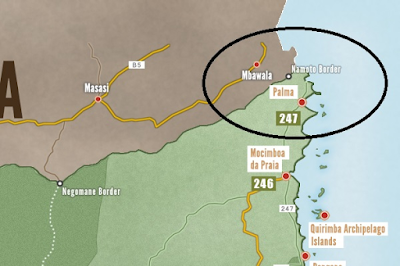 Here are two updates on the horrific situation in Mozambique, where Islamic jihadists allied to ISIS have attacked towns and villages in the northeastern portion of the country. Many victims have been beheaded, including children.

The first is a report from the BBC, cross-posted from The Religion of Peace.

The second is from the Portuguese news outlet, Publico. Translation by Fousesquawk.

Flight from Palma carries hundreds to the border with Tanzania

More than 2,000 people have already died and almost a million displaced as a result of the crisis

Caption below photo: The situation in Mozambique continues to worsen

Hundreds of people who fled from Palma, Northern Mozambique during the armed attack on Wednesday are arriving at the border with Tanzania, in Namoto, next to the Rovuma River, one of the members of the group asking for aid told Lusa (news agency) on Monday.

It is estimated there are between 200-500 people already in the riverside village having (traveled) about 50 kilometers from Palma, Denis Iloko told Lusa by telephone call to Pemba without being able to give the number of dislocated because ” it continues to increase”.

The groups include many children and all have been walking in the bush after leaving everything behind when armed groups entered the village.

“We have many children here. Many children are dying in the bush. A woman gave birth here and was (evacuated to) Tanzania,” he stated.

The group fled in the direction of the north on the day of the attack, having reached Namoto after three days of walking, without food and without water, facing the terror.

Since Wednesday, “There have been people captured and others died. Those who were lucky, managed to walk throughout the night to now make the crossing.”

“We are afraid. We are asking for help for the government to coordinate forms of transport with Tanzania,” he said, alluding to the “large barge” that usually makes the connection between the banks.

Alefo, another man who fled from Palma and was there, said that a boat already carried the first group of dislocated who wanted to reach Mueda, seat of the Mozambican district, but farther into the interior of Cabo Delgado.

“A boat took one group, but it has not yet returned. The number of people is increasing. I think that there are 500 people here and more are arriving,” he said.

The town of Palma, seat of the district that houses gas works in the northern part of Mozambique, was attacked on Wednesday by insurgent groups that have been terrorizing the region for three years.

Dozens of civilians, including 7 persons who tried to flee from the main hotel in Palma, in the north of Mozambique, were killed by an armed group that attacked the town on Wednesday, the Mozambican Ministry of Defense said today.

In the rescue operation of expatriates from a hotel in Palma, on Friday, a Portuguese citizen was gravely injured and was transferred to Johannesburg in neighboring South Africa, a government source told Lusa on Sunday.

The violence is provoking a humanitarian crisis with almost 700,000 dislocated and more than 2,000 dead.