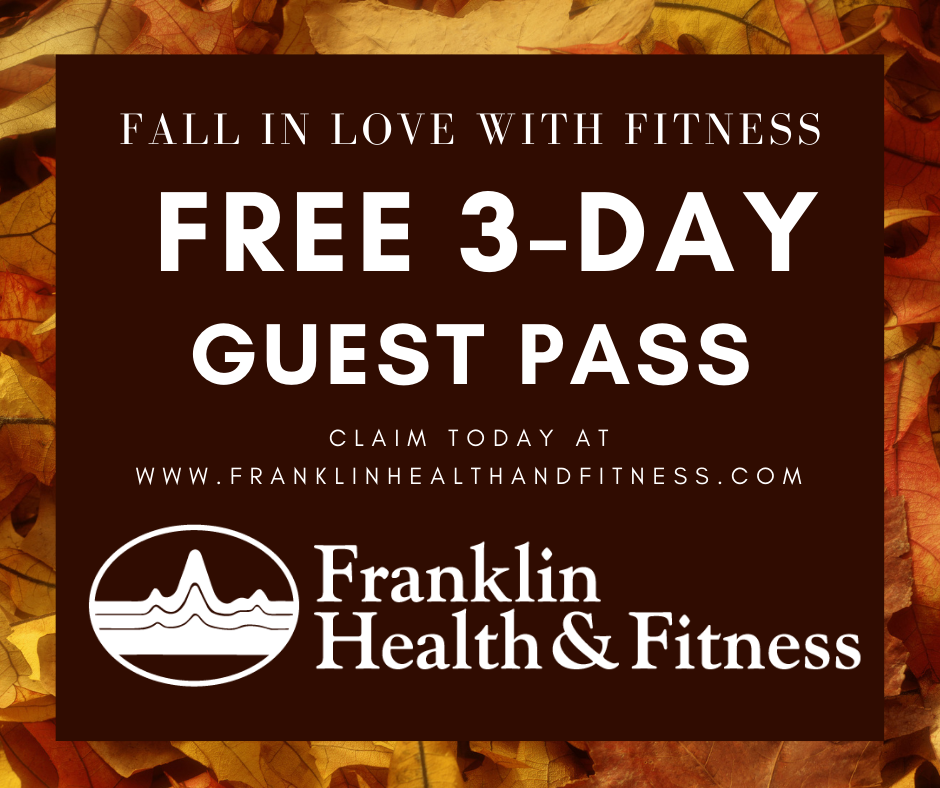 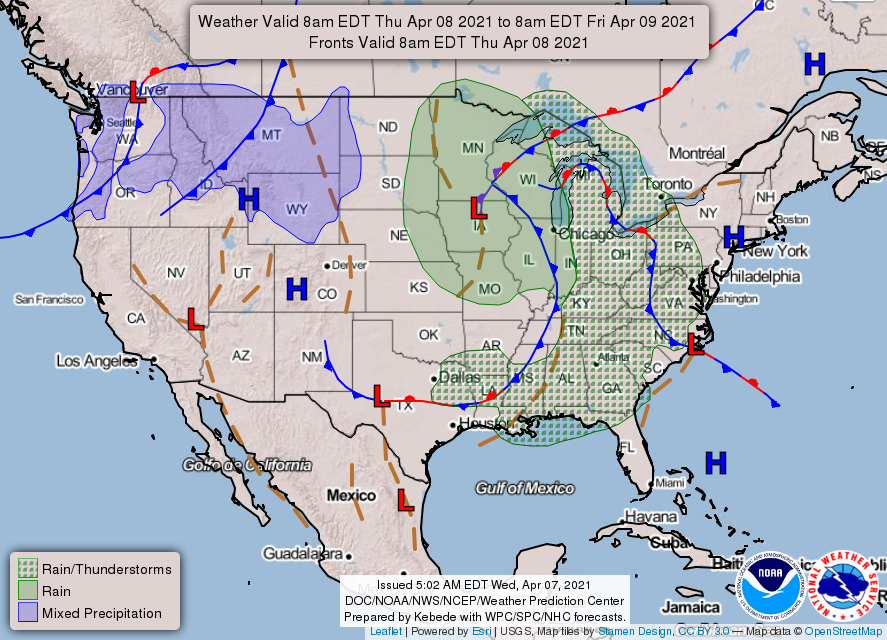 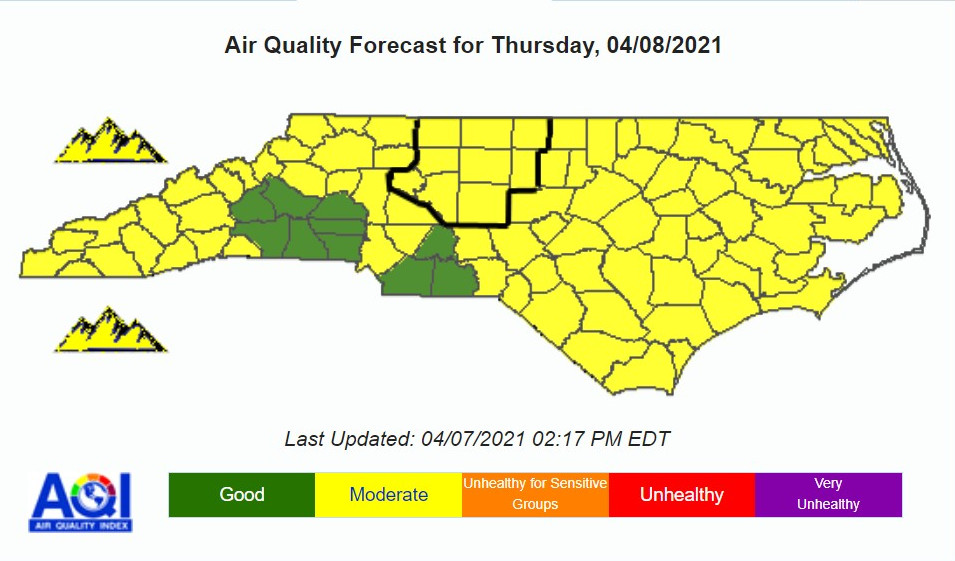 Air quality is in the extreme middle range of yellow for most of the county, with the ridges and other higher elevations today also being in the middle upper yellow range.

April 8 is the 98th day of the year in the Gregorian calendar. 267 days remain until the end of the year. Historical Events

217 – Roman Emperor Caracalla is assassinated. He is succeeded by his Praetorian Guard prefect, Marcus Opellius Macrinus.
876 – The Battle of Dayr al-’Aqul saves Baghdad from the Saffarids.
1139 – Roger II of Sicily is excommunicated.
1149 – Pope Eugene III takes refuge in the castle of Ptolemy II of Tusculum.
1232 – Mongol–Jin War: The Mongols begin their siege on Kaifeng, the capital of the Jin dynasty.
1271 – In Syria, sultan Baibars conquers the Krak des Chevaliers.
1730 – Shearith Israel, the first synagogue in New York City, is dedicated.
1820 – The Venus de Milo is discovered on the Aegean island of Milos.
1832 – Black Hawk War: Around three-hundred United States 6th Infantry troops leave St. Louis, Missouri to fight the Sauk Native Americans.
1866 – Italy and Prussia ally against the Austrian Empire.
1886 – William Ewart Gladstone introduces the first Irish Home Rule Bill into the British House of Commons.
1895 – In Pollock v. Farmers’ Loan & Trust Co. the Supreme Court of the United States declares unapportioned income tax to be unconstitutional.
1904 – The French Third Republic and the United Kingdom of Great Britain and Ireland sign the Entente cordiale.
1906 – Auguste Deter, the first person to be diagnosed with Alzheimer’s disease, dies.
1908 – Harvard University votes to establish the Harvard Business School.
1911 – Dutch physicist Heike Kamerlingh Onnes discovers superconductivity.
1913 – The 17th Amendment to the United States Constitution, requiring direct election of Senators, becomes law.
1918 – World War I: Actors Douglas Fairbanks and Charlie Chaplin sell war bonds on the streets of New York City’s financial district.
1924 – Sharia courts are abolished in Turkey, as part of Atatürk’s Reforms.
1929 – Indian independence movement: At the Delhi Central Assembly, Bhagat Singh and Batukeshwar Dutt throw handouts and bombs to court arrest.
1935 – The Works Progress Administration is formed when the Emergency Relief Appropriation Act of 1935 becomes law.
1942 – World War II: Siege of Leningrad: Soviet forces open a much-needed railway link to Leningrad.
1942 – World War II: The Japanese take Bataan in the Philippines.
1943 – U.S. President Franklin D. Roosevelt, in an attempt to check inflation, freezes wages and prices, prohibits workers from changing jobs unless the war effort would be aided thereby, and bars rate increases by common carriers and public utilities.
1943 – Otto and Elise Hampel are executed in Berlin for their anti-Nazi activities.
1945 – World War II: After an air raid accidentally destroys a train carrying about 4,000 Nazi concentration camp internees in Prussian Hanover, the survivors are massacred by Nazis.
1946 – Électricité de France, the world’s largest utility company, is formed as a result of the nationalisation of a number of electricity producers, transporters and distributors. 1950 – India and Pakistan sign the Liaquat–Nehru Pact.
1952 – U.S. President Harry Truman calls for the seizure of all domestic steel mills in an attempt to prevent the 1952 steel strike.
1953 – Mau Mau leader Jomo Kenyatta is convicted by British Kenya’s rulers.
1954 – A Royal Canadian Air Force Canadair Harvard collides with a Trans-Canada Airlines Canadair North Star over Moose Jaw, Saskatchewan, killing 37 people.
1954 – South African Airways Flight 201 A de Havilland DH.106 Comet 1 crashes into the sea during night killing 21 people.
1959 – A team of computer manufacturers, users, and university people led by Grace Hopper meets to discuss the creation of a new programming language that would be called COBOL.
1959 – The Organization of American States drafts an agreement to create the Inter-American Development Bank.
1960 – The Netherlands and West Germany sign an agreement to negotiate the return of German land annexed by the Dutch in return for 280 million German marks as Wiedergutmachung.
1968 – BOAC Flight 712 catches fire shortly after takeoff. As a result of her actions in the accident, Barbara Jane Harrison is awarded a posthumous George Cross, the only GC awarded to a woman in peacetime.
1970 – Bahr El-Baqar primary school bombing: Israeli bombers strike an Egyptian school. Forty-six children are killed.
1975 – Frank Robinson manages the Cleveland Indians in his first game as major league baseball’s first African American manager.
1987 – Los Angeles Dodgers executive Al Campanis resigns amid controversy over racially charged remarks he had made while on Nightline.
1992 – Retired tennis great Arthur Ashe announces that he has AIDS, acquired from blood transfusions during one of his two heart surgeries.
1993 – The Republic of North Macedonia joins the United Nations.
2004 – War in Darfur: The Humanitarian Ceasefire Agreement is signed by the Sudanese government and two rebel groups.
2006 – Shedden massacre: The bodies of eight men, all shot to death, are found in a field in Shedden, Elgin County, Ontario. The murders are soon linked to the Bandidos Motorcycle Club.
2008 – The construction of the world’s first skyscraper to integrate wind turbines is completed in Bahrain.
2013 – The Islamic State of Iraq enters the Syrian Civil War and begins by declaring a merger with the Al-Nusra Front under the name Islamic State of Iraq and ash-Sham.
2020 – Saudi-backed coalition fighting Houthi fighters in Yemen calls for a ceasefire after five years to stop the spread of COVID-19
2020 – World Trade organization predicts a drop in global trade greater than the 2008 financial crisis, between 13% and 32% for 2020