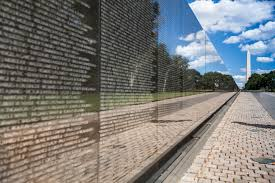 Below is my annual Memorial Day re-post of an article I first wrote many years ago to commemorate two of my friends who died in Vietnam as well as the more than 58,000 other Americans who died in that war.

The recent news that someone had defaced the Viet Nam War Memorial in Washington served to bring back my memories of two of my childhood friends whose names appear on that wall. Mike Vinassa and Dorian Houser were both from west Los Angeles, where I also grew up. We belonged to the same high school social club. All three of us entered military service after high school. I was assigned to Germany; they were sent to Viet Nam. I returned and went on with the rest of my life. They died in Viet Nam. Forty years later, with our country once again at war and American soldiers sacrificing their lives for America, we should also remember those that gave their lives in Viet Nam.

I first knew Dorian in the 1950s. He and his brother, Lee, played on my little league team. Their father was our coach. Later, my relationship with Dory continued in school. In high school, we both belonged to a club called the Chancellors of Venice. As was common in west LA, there were many (off-campus) clubs formed for social purposes. We all had our club jackets, with the name of the club and locale (Venice or WLA) embroidered on the back. The colors of the clubs varied (ours was green). As we ended our high school days, these clubs disbanded as we went our separate ways-off to college, work or military service. In Dory’s case, he entered the Marines in 1966, and after training, was sent to Viet Nam. On May 10, 1967, one month before his 21st birthday, he was killed in Quang Tin. He was hit in the chest by shrapnel and killed instantly.

I happened to be home on leave from Germany when we got the news that Dory was dead. I was able to attend his funeral before returning back to Germany. I’m a little embarrassed to admit it after all these years, but I chose not to wear my uniform to the funeral, simply because I was afraid his family might react emotionally to it. I have always regretted that decision.

Dory was the kind of guy that no one could dislike. He was friendly and unassuming. Needless to say, his funeral was a sad and emotional event. In the last couple of years, I have visited his grave a couple of times since my mother-in-law is interred in the same cemetery. About a year ago, I came across a posting about Dory by his sister. She described her brother and was looking for anyone who knew Dory and remembered him. I answered her post, but the email is no longer valid. As yet, I have not been able to contact her.

Mike Vinassa was also a member of the Chancellors. He was a stout, barrel-chested kid with a big tattoo on his shoulder, something unusual at the time for someone so young (still in high school). Needless to say, he was tough and didn’t mind a good fight. Most other kids knew not to mess with him, but among his friends, he was well-liked. I remember one night we were at a party and he wanted to (playfully) roughhouse with me. We started slap-fighting and wrestling on the front yard of the house, and (somehow) I was able to throw him to the ground and fall on top of him. As you may know, innocent roughhousing among teenagers can easily turn into a real fight, and I remember thinking that Mike might suddenly get mad, so I rolled over and let him get on top, thus letting him win the match.

After high school, I went on to complete 2 years of college before I entered the Army. I basically lost touch with Mike and Dory at that time.

I had recently arrived at my post of duty in Germany when I came across Mike’s name while reading the Viet Nam obituaries in the Army Times. It wasn’t until several months ago that I learned the circumstances of Mike’s death, which occurred on May 22, 1966.

Mike was a member of C Co, Ist Bn, 8th Cavalry, 1st Cav Division (US Army). Ironically, Mike was a short-timer, soon to return to the US, and, on that day, assigned to non-combat duties. Yet he insisted on accompanying his unit on a final combat mission in the Vinh Thanh Valley. It was on that final mission, that Mike lost his life-under heroic conditions. He personally led a group of his comrades in charging and taking out a machine gun nest that was pinning down his unit, but was fatally shot in the process. For his actions, Mike was posthumously awarded the Distinguished Service Cross. His sole survivor was his mother.

In subsequent years, I have been able to find both their names on the Viet Nam Memorial. (I was living in the Washington area at the time.) As stated, I have visited Dory’s grave, but as yet, have not identified Mike’s cemetery. When I look back at my life after the Army, I contemplate how I finished college, began my career, got married, had children, retired, and now find myself in my 60s. But as I looked down on Dory’s grave, I realized that he and Mike are frozen in time-forever 20 years old. I wonder what became of their parents, the rest of the families.

In a sense, today’s soldiers are more fortunate than those who went to Viet Nam. The overwhelming majority of the American people greatly respect them (with the notable exception of the usual mindless idiots who are not worth further mention in this essay). Soldiers returning from Viet Nam were often subject to dispicable treatment from those of their own generation who did everything they could to avoid military service. Once the Viet Nam War ended, the country wanted to forget about it as quickly as possible-after all, it was just a tragic period in our history. We also forgot about our Viet Nam veterans who came back alive-in so many cases, as walking wounded. They deserved so much better from us. They are still among us, and in many cases, still wounded.

All of us who lost friends or family members in Viet Nam should try to keep their memories alive and honor them. God rest their souls.

My original post was discovered on the internet by Dory’s sister, who was naturally shocked and deeply touched. She currently lives in central California. We exchanged a couple of e-mails. I learned that Dory’s dad had passed on, but that his brother was still around and doing fine.

Last year, I was finally able to pay my respects at Mike’s grave at Forest Lawn in Hollywood Hills. Even though I was able to obtain the grave marker and a map from the office, finding graves at Forest Lawn proved to be tricky since the little stone markers they use to give row and plot numbers are worn. (I was also looking for my aunt’s grave, but never could find it.) In addition, there was a driving rainstorm. It took over 30 minutes, but I finally find Mike’s grave. His Mom, who lost Mike’s father in Korea, now lies next to him.  Because of the weather, I wasn’t able to linger long. The next time I am in LA, I will try and return.

Last year, I was also contacted by a high school friend of Dory’s (whom I had not known). He also served in Viet Nam, was living in Florida, and was trying to find where Dory was buried. I was able to give him the information he needed, plus put him in contact with Dory’s sister. He is determined to come to California and pay his respects to Dory in the near future.

One way or another and to one extent or another, our generation was marked by Viet Nam, whether we served there or not. For Dory, Mike, 58,000+ other Americans and millions of
Vietnamese, the scar was total. In addition, we still have survivors among us from World War II, the Korean War, and the wars since Vietnam, not to mention that still on-going in Afghanistan. This is why Memorial Day is an important day for us all. If we ever forget their sacrifices, then we will have lost our greatness.