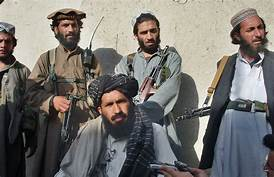 As the West prepares for the next wave of young Afghan men in their 20s, we look once again to Sweden, which has been dealing with Afghan migrants for some time now. Not only do they have to deal with murders, rapes, arsons, and what-have-you, deportation back to Afghanistan is now all but impossible now that the country is under new management.

The conservative Swedish site, Nya Riks has a sarcastically worded article about a young Afghan guy who set fire to an asylum center in Sweden and has just been arrested in Germany. Now he will return to Sweden, be sentenced to a couple of years in jail, and be released back onto the streets of Sweden to commit more mayhem.

The term “bearded children” refers to young migrant men from Afghanistan and other Muslim countries who claim to be underage-even if they sport beards. Unless the authorities can prove otherwise-often through physical examinations- these criminals have to be treated as children in the courts.

Afghan Sharif Heidari set fire to migrant housing- Picked up in Germany and now gets to stay in Sweden the rest of his life.

The mentally-ill Afghan migrant, Sharif Heidari, who during 2017, set fire to the Asarum migrant housing in Karlshamn municipality, has been brought from Germany to Sweden for trial.

For some reason, prosecutor Malin Niklasson lifted the arrest on 16 June 2017, and Heidari then moved to Germany instead of using the special rules for small children from other countries who are completely alone and extradited to the adult world. In Sweden, this is called “bearded child legislation” and often means that adults from other counties are allowed to study and rape for several years because they are never deported since they vote for extreme left parties. The legislation that protects these so-called “bearded children” is constantly being expanded, and the latest is that the Migration Board has decided that murderers and gang-rapists from Afghanistan can not be deported on grounds of the security situation in their home country. No need for protection for the Swedish people has ever been identified in this context.

In an interview with SVT, prosecutor Hedvig Lundblad, who will handle the main proceedings, seems to be satisfied that Heidari has been brought from another country to then be guaranteed lifetime support by the Swedish taxpayers.

It is very unlikely that Sweden will resume deportations to Afghanistan as long as the Taliban is running the country. Thousands of rapists and other criminals from that country will thus, live on Swedish tax money for the rest of their lives. This is because Sweden does not deport people who have lived in the country more than ten years if they have not committed murder.

SVT text on its site completely obscured that it concerns a migrant who set fire to his own residence. 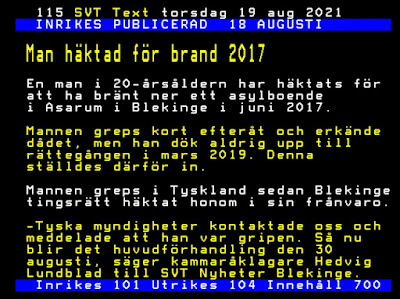 A man in his 20s has been arrested for setting fire to an asylum residence in Asarum in Blekinge in June 2017.

The man was arrested shortly after admitting to the crime. But he never showed up for trial in March 2019. The (trial) was therefore canceled.

The man was arrested in Germany after the Blekinge District Court charged him in his absence.

German authorities contacted us and reported that he was arrested. So now the proceedings will be August 30, says prosecutor Hedvig Lundblad to SVT News, Blekinge.

Nor does SVT News take care to point out that it was migrants themselves who set fire to the residence- instead, it appears in an interview with a defense lawyer. In the few cases in which a “right-wing extremist” is suspected, on the contrary, they take care to point that out.