A Jewish organization in Europe has reacted in outrage at the use of a yellow star on a banner carried in Brussels on Sunday in protest against the Covid restrictions. The implication of the banner is that society is treating non-vaccinated people as Jews were treated in Germany in the 1930s and 40s. Many Jews see this as a trivialization of the Holocaust.

The below article from the French-language news outlet, 7Sur7, is translated by Fousesquawk. 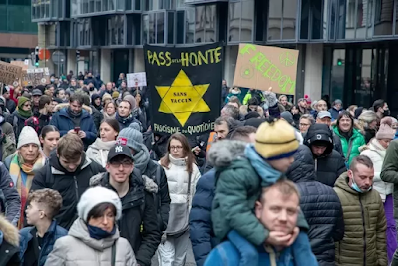 “It makes me sick.”: The presence of the yellow star during a demonstration in Brussels shocks a Jewish association

The European Jewish Association reacted in outrage Sunday at the yellow star represented on one of the banners of demonstrators participating in the march organized in Brussels against the health measures taken by the government to stem the spread of the Corona virus. “It is difficult to say how much of a mistake this is,” said Rabbi Menachem Margolin, president of the association.

“It’s hard for me to see the similarity between being asked to get vaccinated during a pandemic-or to assume the consequences if you don’t-and the systematic extermination of 6 million Jews in the death camps, the gas chambers, or in the open-air common graves,” said M. Margolin.

“It makes me sick to think that so few people understand the pain that such banners provoke and that so few people truly realize the enormity and the magnitude of the Holocaust. To those who marched today with a large yellow star, I say: Don’t do it. It is of little importance what you think of the health restrictions, nobody is tattooing your arms, nobody is putting you in cattle trucks, and nobody wants you, your family, and your loved ones to die.

First of all, make sure you have the knowledge and know what this yellow start really represents,” the president of the European association reiterated.

Fousesquawk comment: I find it hard not to agree with Rabbi Margolin. And I say this as one who has worn a facsimile of the yellow star at a public event-to protest anti-Semitism-and who has often used Nazi imagery to protest present-day anti-Semitism. Take issue of that if you will, but there is a difference.

Whatever you or I think about restricting the movements of non-vaccinated people (and I have my reservations), it is a stretch to compare the isolation of unvaccinated people with the discrimination/isolation imposed on Jews by the Nazis even before the Holocaust began. Jews were forced to wear yellow stars, were not allowed to frequent restaurants, their shopping hours were restricted, etc. etc. Not because they had not been vaccinated, but because they were Jews. Eventually, they were forced to live in ghettos in occupied Eastern European countries during the war, while in Germany, several families were forced to live in a single designated “Jewish” residence” (before they were rounded up to be shipped East.)

To me, the use of the image of the yellow star should be reserved to protest modern-day anti-Semitism and should not be hijacked for other causes.