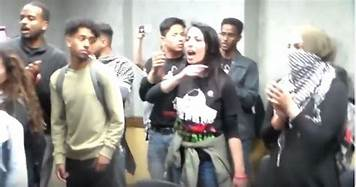 SJP disruption at UC Irvine in May 2017

I am linking an article by the pro-Israel organization, Facts and Logic About the Middle East (FLAME) which describes how Students for Justice in Palestine (SJP) is responsible for much of the anti-Semitism found on college campuses. It contains a lot of specific examples, including an incident in May 2017 at UC Irvine in which I was present. The article is entitled, “How SJP’s Antisemitism and Violent Harassment Threaten Jewish Students”. I am in agreement with everything stated in the article.

SJP was co-founded by UC Berkeley professor and activist Hatem Bazian, a Palestinian himself, who studied at San Francisco State University, where he was a pro-Palestinian agitator, and even then, his rhetoric and activity at SFSU led to accusations of anti-Semitism, accusations which have persisted to this day. In my view, SJP was founded to serve as an adjunct to the various chapters of the Muslim Student Association (known as the Muslim Student Union at UC Irvine). Many MSA/MSU chapters have been very active when it comes to anti-Israel activism on campuses, but it seems that SJP (which has many common members of both organizations plus, in the case of SJP, some non-Muslim members) tends to be in the forefront of the more disruptive actions taken against pro-Israel organizations and events on campuses. That certainly appears to be the case at UC Irvine, where an SJP chapter was formed after the suspension of the MSU as a result of their disruption of Israeli Ambassador  Michael Oren’s speech at UCI in 2010. SJP at UCI went on to disrupt pro-Israel events at UCI in May of 2016 and May of 2017, which has led to (mild) disciplinary actions taken against them by the university.

As cited in the FLAME article, it is not just UC Irvine, but campuses across the nation that have experienced SJP’s tactics of disruption, bullying, and verbal/physical intimidation against Jewish students and other supporters of Israel. I have personally witnessed it at UCI. More than a few times, SJP and MSU (unsuccessfully) tried to intimidate me and prevent me from videotaping their speakers.

As I have written more times than I can remember, SJP has proven that they don’t belong on any college campuses. They do not respect the right of others to speak, and they try to shut speech down that they don’t agree with. I applaud Fordham University for its decision to ban SJP from its campus. Fordham was supported in their subsequent legal battle by the Zionist Organization of America.

Any campus that experiences these tactics is fully within its rights to ban such an organization. I only wish more universities had the gumption to stand up to SJP. Unfortunately, this is not the case.

It is instructive that virtually every pro-Israel group on US college campuses conducts itself in a civil and orderly manner, quite the opposite from SJP and its allies who advocate for the Palestinian cause. I would add here that if individuals or organizations want to support the Palestinian cause on campus in a civil and orderly manner, they should be free to do so, but when they engage in thuggish tactics designed to strip away the free speech rights and safety of pro-Israel groups, and when they cross the line into anti-Jewish rhetoric and attacks, no school should have to tolerate that.