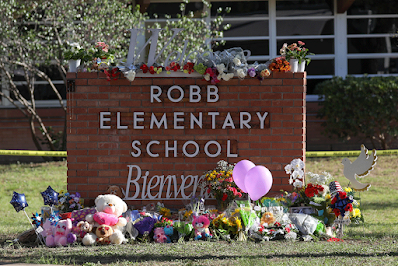 With each passing day, the details surrounding the horrific shooting at a Uvalde, Texas elementary school become more and more troubling. Of course, the most troubling aspect is the loss of 19 children and two teachers. That is unbearable. But now, more and more questions are unfolding surrounding the actions of the police as the children and teachers were being murdered.

Initially, we were told by police that the shooter was engaged by a school security officer/cop in an exchange of gunfire as the shooter was in the process of entering the school, that the officer was wounded but managed to get the shooter to drop ammunition that would have led to greater loss of life. Then we were told that was not what happened. We were told that when police arrived, they entered the school and took down the shooter, too late, of course, to save the 21 victims, but that their heroic action prevented additional loss of life. Now we learn that police waited outside for about an hour before entering, as family members of the children begged them to go in. They secured the area and kept families back while evacuating other school personnel and children. Then we learned that it was a Border Patrol agent or agents who went in and took down the shooter.

Now, the chief of police is admitting today that they erred.  The on-scene commander apparently made the judgment that the situation had changed from a shooting situation to a barricade situation. But what about the prospect that there were critically wounded children who needed immediate medical care?

As a retired DEA agent, I can tell you that the last thing law enforcement people want to do is Monday morning quarterback when police make mistakes in the course of a tragic event like this. There is a Dutch saying that “the greatest sailors are on the shore”. It’s true, and unless you have been in such a situation, you can’t say how you would react. In fact, as I write this, we still have more details to learn, some of which may support some of the police actions. I just don’t know at this point.

In the shooting situation I experienced. We had three undercover agents (one DEA and two local cops), and suddenly, shots were ringing out. We responded, and, as it was, the only person who died was the bad guy who started shooting when he saw the arrest team moving in as he was delivering the heroin. As it was, three local cops, two of whom were undercover, were wounded but survived.

Shifting gears a bit, with all the talk about gun control measures and the political game now in full progress, could I offer a (partial) solution to the problem of school shootings? It’s not my idea, but rather one that so many retired law enforcement people are advising.

It is high time that no matter the cost, schools have to have armed security. Yes, I know we are talking about hundreds of thousands of schools around the country. It’s a monumental task and will cost money. But we have so many thousands of retired law enforcement personnel who lawfully possess and carry firearms, and who would be more than happy to spend a few hours of their day guarding their local schools at a minimal salary to augment their pensions. You don’t have to create a new agency and hire and train new people with full salaries and benefits. Many would do it on a volunteer basis. This is something that could be handled on the state level with financial support from the federal government if necessary. Declaring schools as “gun-free zones” only ensures an easy target for shooters.

It is not just schools. Places of worship and other institutions also need security, and many hire their own security with private funds.

It’s hard to admit that this is the kind of society we live in today, but the need for armed security has never been higher. There are so many things that our government at the federal, state, and local levels has thrown money at, but this would be a great investment (I hate to use that word, but I must in this case). I support aid to Ukraine, but think what those huge sums of money could do to enhance our security at home.

And consider this, especially those of you Beto O’Rourkes out there who want to remove guns from law-abiding citizens. In Israel, ordinary citizens normally own guns and are encouraged to do so. When some Palestinian terrorist goes on a stabbing spree or uses his/her car to run down innocent people, he/she knows he/she is likely going to be shot and killed by an ordinary citizen even before the police or army get there. Does that stop them? No, because, after all, they are fanatics who are ready to die, just as these school shooters are. But in Israel, the threat is usually stopped before the body count becomes so huge. Indeed, Israel has been dealing with this problem for so long now, that other police from around the world turn to Israel for training. Of course, here at home, that drives the pro-Palestinian lobby and their leftist allies crazy.

Finally, rather than pass more laws that would only disarm law-abiding people and make them defenseless against this huge problem of violent crime and mental illness that we suffer from, wouldn’t it be better to use the laws we have to keep violent criminals locked up, especially when they commit a crime with a gun? Wouldn’t it be better if we could keep mentally-ill people with violent tendencies in mental institutions? I know that raises a host of questions as to who decides a person has to be institutionalized. Decades ago, the courts and the powers that be decided that it was better to release mentally ill people out into the community and let them be cared for there. Go to places like Los Angeles and San Francisco and see how that has worked out.

Those are my thoughts, and I express them reluctantly. The last thing I want to do is second guess cops who make an honest mistake under such horrific conditions. No doubt, they all feel terrible, and I pray for them. The families of the victims deserve straight answers as to the chain of events, and-as always is the case- the Uvalde tragedy must be used as a teaching point for state, local, and federal law enforcement agencies. No doubt the Uvalde case will be incorporated into law enforcement training academies everywhere.