Christofer Ahlqvist, editor-in-chief of the Gothenburg Post in Sweden, has an important article today regarding Gothenburg’s gang leaders. He includes the names and photos of 12 of the gang leaders. (He actually refers to 13, but only 12 pictures appear. The below photos appear in the article linked directly below, however, there is a subscriber block on that article. Today’s GP also has an accompanying article that introduces the expose. That is translated by Fousesquawk. We are trying to attach names to the below photos through other sources. At seems that at least some of the below individuals are now in prison.

These gangs are exclusively run by immigrants from the usual hot spots in the Middle East and North Africa, Somalia, Afghanistan, etc. We have translated previous articles regarding the gang situation in Gothenburg including last year’s murder of a policeman. 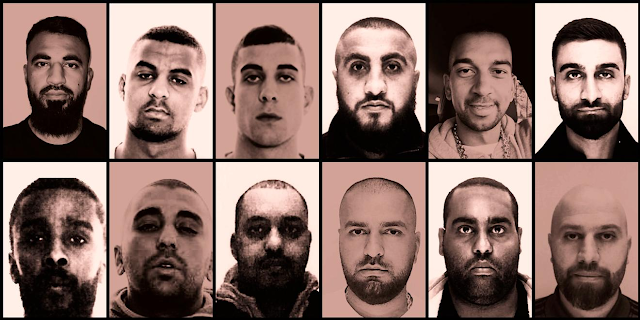 https://www.gp.se/nyheter/d%C3%A4rf%C3%B6r-m%C3%A5ste-vi-betrakta-g%C3%A4ngledare-som-makthavare-1.75451296
Caption: 20 people have been murdered within the context of the gang war in Biskopsgaden. (Neigborhood in Gothenburg). Last summer a policeman was shot to death during his work shift in the quarter. Photo: Anders Ylander
Christofer Ahlqvist: Why we must consider gang leaders as (being) those in power
Chronicle- Murdered children, kidnappings, and witness testimonies that are withdrawn. The criminal gangs affect tens of thousands in Gothenburgers in the neighborhoods they hold hostage. Today, Gothenburg Post examines the gangs and here Editor-in-Chief Christofer Ahlqvists explains why the identified gang leaders should be viewed as (being) those in power.
“You’re not getting in here!” The message to our team was clear. The threatening people did not want us to carry out our journalistic assignment in the neighborhood. The incident occurred when we were going to report on the unrest that broke out in connection with the fatal shooting in Hjallbo last year. We were forced to do our live broadcast from another location than what was (planned). The next day we were back in the neighborhood again and did our report. This time Gothenburg Post was directly affected by the actions of the gang and network. But there are others who are affected daily.
Criminal gangs are terrorizing the neighborhoods where they operate and according to the police, affect tens of thousands of Gothenburgers just in our suburbs alone. In the last few days, we have been able to report on murdered children, kidnapped teachers, and witness testimonies withdrawn.
The foremost mission of the media is to examine power. Those who run the criminal groups undoubtedly have both great influence and power. With that follows a great public interest, which motivates us to report as much as we know about the gangs and their leaders for our readers. Thus, in today’s examination, we are publishing names and photos of convicted criminals who are identified by authorities as gang leaders.
The power that a gang leader possesses is not official, compared to, for example, a politician or a business leader. These individuals often deny that they have such a role or a position of power. That makes our job harder but also more important. Behind today’s publication lies months of intensive work which is based on several years of gathering knowledge and experience. Our reporters have gathered and put together official documents such as investigations and court judgments. They have interviewed sources, both public officials and people who speak (confidentially). Due to a lack of answers from the identified individuals, we have utilized their answers from trials and hearings in order to, in spite of everything, present their version. We have also interviewed those who are really affected by the gangs in our local community. All in all, we can show the influence and power the gangs and their leaders have, whether they admit it or not.
In Sweden, the number of shootings has increased this year compared to the past 5 years. At the same time, the situation in Western Sweden looks somewhat brighter. A partial explanation might be that so many gang criminals in leading positions are behind bars. But according to Mats Bergström, Acting Deputy Regional Chief for Region West, that can quickly change.
“Even if the numbers go in the right direction, something serious can happen that upsets it. The situation is so serious. We have heavy conflicts in our region, but we are keeping tabs on it, and we have found work methods that are working.”
The Gothenburg Post will continue to watch and scrutinize what the authorities and politicians are doing to overcome the problem. But we will also examine the unofficial people in power who are causing so much pain to so many citizens.