“Everyone” is in the title of HR 6666 that will authorize $100 Billion for military to use upgrades of technology for surveillance to track contacts of coronavirus positive tests. ‘TRACE’ (in title) to their home for testing and removal if needed for better care?  China did so–those who were removed were never seen again said some on social media.

The only time that contact tracing makes sense medically is in the very early stages of contagion. It’s pointless to do contact tracing now that there’s been mass exposure to the virus and the Pentagon Study shows men who had a flu shot in military were 36% more likely to text positive. This supports the thesis that flu shots do not offer good protection.

6666 is about surveillance and population control, using virus contacts as a pretext. It is possible to ‘vaccinate’ with a chip and a scan can reveal banking information; it has big money in it: Rockefeller Foundation. (Google ID2020 Agenda)

1. Not Needed. Why should so much time, money, effort and loss of freedom be connected to a virus that has no proven mortality beyond 1% as stated repeatedly. A group of researchers analyzed data from China and found that the overall mortality rate of COVID-19 was 1.38%. But adjusting for cases that went unaccounted for due to their mild or asymptomatic nature, the mortality rate decreased to around 0.66%. The journal Lancet Infectious Diseases, March 30.

99% of Those Who Died From Virus Had Other Illness, Italy Says. (Bloomberg News, March 18) This appears to be true in US, as doctors are told to report deaths in hospitals as from corona virus. The hospital gets $5000 reimbursement from Medicare for pneumonia, but $13,000 if coronavirus is a diagnosis—and $39,000 if they were on a ventilator. The intent seems to justify the over-projections and lack of mortality that CDC hyped. The Stanford Study said it’s 50x less lethal than previously thought.

In the high mortality rate of Italy, 99% were elderly, had prior flu shots and pre-existing conditions. The Stanford Study shows Covid19 is 50x more contagious, but 50x less fatal than previously thought. We should focus on natural immunity.

The Pentagon Study showed men in military had 36% increase in Covid19 testing for those who had a flu shot in 2018. Natural immunity in those who had no shot is better than partial immunity for those who got the shot and may be more susceptible supports an NIH concerns for Antibody Dependent Enhancement (ADE) as explained in Wikipedia.

2. Not Safe!  Read the headlines on this website–https://childrenshealthdefense.org/category/news/vaccine-safety/ This is a goldmine of truth for anyone to research, offered by Robt F. Kennedy who’s been to court many times…he understands more than 99.99% of what we don’t hear in mainstream media.

“Two or three witnesses” Courts honor this principle, but the word for witness in Matthew 18:16 is martus, martyrs. In other words, people who paid a big price for being truthful are more to be trusted than popular media that make money from being part of a single collective voice that says the same thing like robots—’vaccines are safe,’ but there are no double blind studies to show it and the studies they cite use the safer MMR vaccine administered later in childhood to tout safety against autism. A recent peer-reviewed study of 666 cases showed 470% increase in autism & nearly 4-fold increase in other disorders of young children. 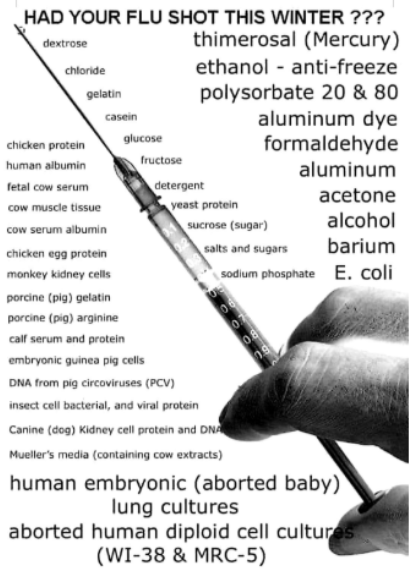 The drug companies do not do long-term studies. Their disclaimer of what the drug or vaccine could do in their package insert is considered their protection against lawsuits, so why should they do studies? They got damnable immunity in the 1980s so they are no longer accountable and people are told vaccinations are safe when there is no law compelling MDs to report bad events

3. Not Honest. British Medical Journal (BMJ) editor, Dr. Peter Doshi, published a comprehensive rebuke of CDC’s annual ritual of exaggerating flu mortalities entitled “Dissecting CDC’s Deception: Are US Flu Death Figures More PR Than Science?” Doshi accuses the CDC of purposefully inflating flu deaths to frighten the public into purchasing vaccines. To illustrate CDC’s chicanery, Doshi observed that CDC’s announced number of reported pneumonia and influenza deaths in 2001 at 62,034. Yet less than half of one percent of those were actually attributed to influenza.

Furthermore, of the mere 257 cases that could reasonably be blamed on the flu in CDC’s mortality data, only 7 percent were laboratory confirmed cases of influenza. That’s 18 lab confirmed influenza cases out of 62,034 “pneumonia and influenza” deaths—or just 0.03 percent, according to HHS’s own National Center for Health Statistics (NCHS). https://childrenshealthdefense.org/news/flu-misinformation-and-coronavirus-fears-my-letter-to-dr-sanjay-gupta/

The Billions that CDC makes from their patents and big pharma relationship should help our understanding—the CDC is a private business, not a gov agency.

4. Not Up to Date.  Antibody Dependent Enhancement (ADE) Linked to Fatality and Flu Shots

A recent discovery, Antibody Dependent Enhancement is explained on Wikipedia. It appears to this physician that partial immunity from vaccination put one at high risk serious reaction later.  The NIH website has numerous articles reflecting concern on the safety of vaccines as seen here.

“ADE remains a concern in development and use of vaccines and immunotherapeutics against these viruses…Comprehensive evaluation of humoral and cell-mediated immune response to vaccines in preclinical and clinical studies, with the help of robust assays that can detect ADE, is suggested to be crucial for the assessment of vaccine safety and efficacy. Such evaluations would require a better understanding of the immune correlates of protection. Lastly, investigation of long-term effects of vaccine implementation is advisable while considering approval for future vaccines.” ncbi.nlm.nih (dot) gov/

NONE of these assays and “long-term” safety testing have been done on the vaccine that Bill Gates owns the patent on (Pirbright Institute in Europe linked to Bill & Melinda Gates Foundation) and Gates has his vaccine ready (though virologists say it takes years to develop.

Dr. Fauci paid Wuhan $3.7 million to ‘upgrade’ the virus circa 2014 when it developing it in Chapel Hill, N Carolina became against the law.  Rudy Guliani said, “We paid for the damn virus that’s killing us.”  Washington Times, April 27, 2020

The CDC Vaccine Adverse Events Reporting System (VAERS) is like reporting a loss of loss of chickens to the fox guarding the hen house. The CDC makes billions of dollars from ownership of the patents and their relationship with big pharma. Why should they require reporting by physicians—they don’t. As a board-certified MD, I never heard of VAERS and never reported any anything to them—their protocol says anyone can report to them—so what? Who knows about it and there’s no benefit to do so especially for MDs who are not compelled by any law to report it. The public may feel they did their duty, but for example, did the reader even know about VAERS before reading this here?

6. Not Biblical. The Bible has the first comprehensive health code with quarantine found in Leviticus 13. Entire villages were saved from the Black Death/Bubonic Plague when they discovered this principle hundreds of years ago, but to do so for healthy people (‘lockdown’) is a reversal of biblical truth with the devil in the details as our economy could testify.

Biblical law would hold drug companies accountable for the damages their products cause (as defects in car industry etc) With empowerment of HR 6666 to remove someone from the home who tests positive, Christ warned us that “one shall be taken.” Luke 17:36,37. Luke was a physician and he offers one of six Bible references to “physicians,” (all negative). He knew the impotence of physicians re conditions seen in Luke 8:43 that continue to our time.

The Greek word in Revelation 18:23 that deceives “all nations” is pharmakeia. Those who don’t understand the call out from this false system will suffer the plagues in verse 2-4. It seems likely to this board-certified MD who taught Health Science at Loma Linda University, that America is gone if we snub the Constitution and do the tracking and vaccinating.

7. Religious Reasons: 2.3 billion Christians should object to fetal cells from abortions being injected into their bodies. 1.9 Billion Muslims will object to pork gelatin used in the vaccine—which Jewish people should also reject—it’s an abomination in the law of Moses, Lev 11. These groups constitute 4.2 billion–more than half the world population.

8. Government: The US Constitution includes the 1st Amendment that Congress shall make no laws respecting the establishment of religious. This would include making no laws requiring vaccination with ingredients that would defile the recipients according to their beliefs, 1Cor 3:16,17. Government has already infringed on the right of assembly. In retrospect, the lockdown was not necessary—it was hyped by those promoting global government and control. Nations that didn’t lock down like Sweden are not significantly worse from disease that neighbors in Norway who did, etc. Korea is another example of doing well in spite of not locking down.

9. Business: The lockdown has been a disaster for the economy and millions in third world countries are facing death from starvation. Depopulation is one of Bill Gates’ goals. The Georgia Guidestones (See Wikipedia) shows a goal of depopulation to 500 million. That means 1 in 15 will survive Bill Gates’ goals if he gets his way. Famine anMd pestilence represented by the black and pale horses in Revelation 6 may be arriving sooner than we thought, thanks to big pharma and Monsanto and “terminator seeds” that only work for the season they are purchased; farmers can harvest the seeds from their crop—they have to buy again—to talk about philanthropy by rich people while doing this is a huge stink.

10. Social Loss: Emergency room reports of battered women suggest men can’t handle the time at home and society is deteriorating. Depression, guilt, marital unhappiness, children who can’t go to school and much more are the result of big government trying to do what real healthcare could do by helping the immune system to do its own work without pharma.

Richard Ruhling, MD, MPH offers further information at his website, https://healthhappinessdestiny.com/ His url used to auto-fill with his site when he typed a few letters; now typing those three words brings up ebaby & other sites first—could it be that Google is directing traffic away from Alternative Medicine sites? RFK says so and Google is in with pharma. He offers a free pdf of his book to interested journalists who may contact him at [email protected] 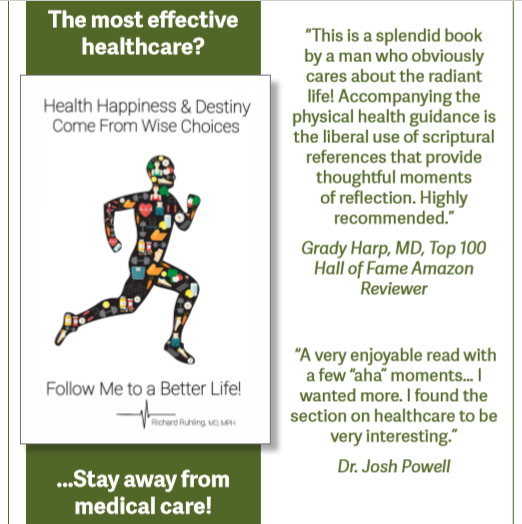