BATTLE FOR WORLD | July 13, 2020: How timely. Unseen forces must be giving help to try and stop World War Three.

A PDF document that was once stored on the Rockefeller Foundation website, according to a president of a foreign country, can no longer be found there. The document was once accessible from the foundation’s archive in 2010 but appeared to have been removed in 2019 because it’s no longer available at the site.

The document has resurfaced on the site “www.nommeraadio.ee” hosted in the country of Estonia. How it got there, your guess is as good as mine, but maybe whomever has decided to resurrect this document is trying to prevent further chaos in the world from happening due to the pandemic – a virus-projection scenario planned by the ruling elites:

In the year 2010 the Rockefeller Foundation published a projection document about a virus infecting the world with dire consequences as a result. On page 18 of the document, the title of the introduction is called “Lock Step”, which details a scenario about a virus pandemic. Quotes follow:

“In 2012, the pandemic that the world had been anticipating for years finally hit. Unlike 2009’s H1N1, this new influenza strain — originating from wild geese — was extremely virulent and deadly. Even the most pandemic-prepared nations were quickly overwhelmed when the virus streaked around the world, infecting nearly 20 percent of the global population and killing 8 million in just seven months, the majority of them healthy young adults. The pandemic also had a deadly effect on economies: international mobility of both people and goods screeched to a halt, debilitating industries like tourism and breaking global supply chains. Even locally, normally bustling shops and office buildings sat empty for months, devoid of both employees and customers.”

“The pandemic blanketed the planet — though disproportionate numbers died in Africa, Southeast Asia, and Central America, where the virus spread like wildfire in the absence of official containment protocols. But even in developed countries, containment was a challenge. The United States’s initial policy of “strongly discouraging” citizens from flying proved deadly in its leniency, accelerating the spread of the virus not just within the U.S. but across borders. However, a few countries did fare better — China in particular. The Chinese government’s quick imposition and enforcement of mandatory quarantine for all citizens, as well as its instant and near-hermetic sealing off of all borders, saved millions of lives, stopping the spread of the virus far earlier than in other countries and enabling a swifter post-pandemic recovery.”

“China’s government was not the only one that took extreme measures to protect its citizens from risk and exposure. During the pandemic, national leaders around the world flexed their authority and imposed airtight rules and restrictions, from the mandatory wearing of face masks to body-temperature checks at the entries to communal spaces like train stations and supermarkets. Even after the pandemic faded, this more authoritarian control and oversight of citizens and their activities stuck and even intensified. In order to protect themselves from the spread of increasingly global problems — from pandemics and transnational terrorism to environmental crises and rising poverty — leaders around the world took a firmer grip on power. At first, the notion of a more controlled world gained wide acceptance and approval. Citizens willingly gave up some of their sovereignty — and their privacy — to more paternalistic states in exchange for greater safety and stability. Citizens were more tolerant, and even eager, for top-down direction and oversight, and national leaders had more latitude to impose order in the ways they saw fit. In developed countries, this heightened oversight took many forms: biometric IDs for all citizens, for example, and tighter regulation of key industries whose stability was deemed vital to national interests. In many developed countries, enforced cooperation with a suite of new regulations and agreements slowly but steadily restored both order and, importantly, economic growth.”

“Across the developing world, however, the story was different — and much more variable. Top-down authority took different forms in different countries, hinging largely on the capacity, caliber, and intentions of their leaders. In countries with strong and thoughtful leaders, citizens’ overall economic status and quality of life increased. In India, for example, air quality drastically improved after 2016, when the government outlawed highemitting vehicles. In Ghana, the introduction of ambitious government programs to improve basic infrastructure and ensure the availability of clean water for all her people led to a sharp decline in water-borne diseases. But more authoritarian leadership worked less well— and in some cases tragically — in countries run by irresponsible elites who used their increased power to pursue their own interests at the expense of their citizens.”

“There were other downsides, as the rise of virulent nationalism created new hazards: spectators at the 2018 World Cup, for example, wore bulletproof vests that sported a patch of their national flag. Strong technology regulations stifled innovation, kept costs high, and curbed adoption. In the developing world, access to “approved” technologies increased but beyond that remained limited: the locus of technology innovation was largely in the developed world, leaving many developing countries on the receiving end of technologies that others consider “best” for them.”

““IT IS POSSIBLE TO DISCIPLINE AND CONTROL SOME SOCIETIES FOR SOME TIME, BUT NOT THE WHOLE WORLD ALL THE TIME.” – GK Bhat, TARU Leading Edge, India”

“Some governments found this patronizing and refused to distribute computers and other technologies that they scoffed at as “second hand.” Meanwhile, developing countries with more resources and better capacity began to innovate internally to fill these gaps on their own.”

“Meanwhile, in the developed world, the presence of so many top-down rules and norms greatly inhibited entrepreneurial activity. Scientists and innovators were often told by governments what research lines to pursue and were guided mostly toward projects that would make money (e.g., market-driven product development) or were “sure bets” (e.g., fundamental research), leaving more risky or innovative research areas largely untapped. Well-off countries and monopolistic companies with big research and development budgets still made significant advances, but the IP behind their breakthroughs remained locked behind strict national or corporate protection. Russia and India imposed stringent domestic standards for supervising and certifying encryption related products and their suppliers — a category that in reality meant all IT innovations. The U.S. and EU struck  back with retaliatory national standards, throwing a wrench in the development and diffusion of technology globally.”

“Especially in the developing world, acting in one’s national self-interest often meant seeking practical alliances that fit with those interests —  whether it was gaining access to needed resources or banding together in order to achieve economic growth. In South America and Africa, regional and sub-regional alliances became more structured. Kenya doubled its trade with southern and eastern Africa, as new partnerships grew within the continent. China’s investment in Africa expanded as the bargain of new jobs and infrastructure in exchange for access to key minerals or food exports proved agreeable to many governments. Cross-border ties proliferated in the form of official security aid. While the deployment of foreign security teams was welcomed in some of the most dire failed states, one-size-fits-all solutions yielded few positive results.”

“By 2025, people seemed to be growing weary of so much top-down control and letting leaders and authorities make choices for them. Wherever national interests clashed with individual interests, there was conflict. Sporadic pushback became increasingly organized and coordinated, as disaffected youth and people who had seen their status and opportunities slip away — largely in developing countries — incited civil unrest. In 2026, protestors in Nigeria brought down the government, fed up with the entrenched cronyism and corruption. Even those who liked the greater stability and predictability of this world began to grow uncomfortable and constrained by so many tight rules and by the strictness of national boundaries. The feeling lingered that sooner or later, something would inevitably upset the neat order that the world’s governments had worked so hard to establish. …”

And the rest of the “Lock Step” projection recommendations are given in the continuing pages of the document.  The country of Estonia has been muscled into the corner by the Globalists being used to antagonize Russia, and so, do not be surprised if the link to access this document go dead. Download links for the PDF document, Link1, and Link2.

It can now be said, with a high degree of accuracy, that Dr. Anthony Fauci, Bill and Melinda Gates, and others are complicit in helping to bring about the coronavirus COVID-19 pandemic. 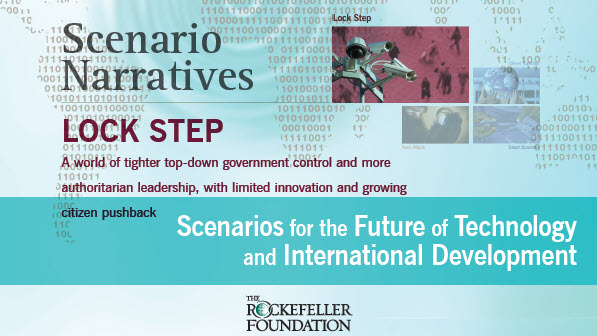