▪️ Wagner PMC units have occupied the Donbass power substation south of #Bakhmut (#Artemovsk). This paves the way for another offensive towards Veselaya Dolina.

▪️ In #Bakhmut itself, according to the Telegram channel @brussinf, the Wagnerians have advanced along Patrice Lumumba Street and entrenched themselves on the outskirts of a dacha cooperative.

▪️ Ukrainian Forces are trying to attack Wagner PMC positions on almost the entire contact line south and east of #Bakhmut, shelling the villages of #Klinovoye and #Pokrovske around the clock. However, the Wagnerians continue to hold the previously occupied territory.

▪️ The Russian Air Force has carried out airstrikes on targets in #Seversk. 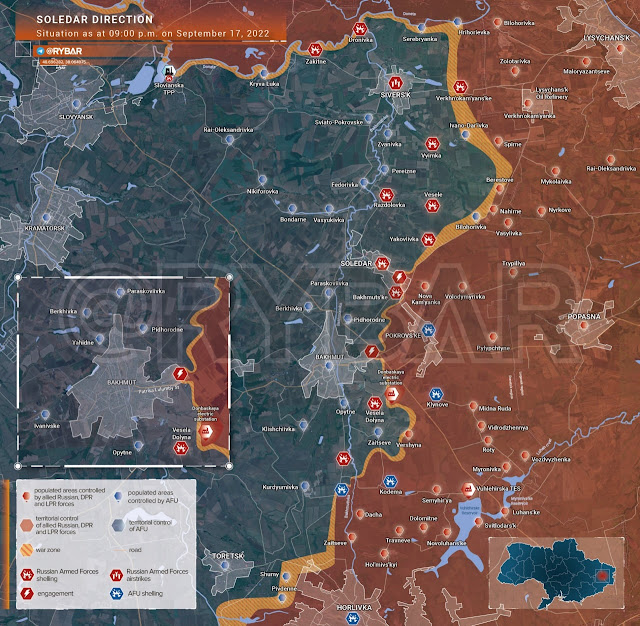 ▪️ The Ukrainian command moved another group of AFU troops to the Sukhoy Stavok area by transport helicopter.

▪️ Russian artillery and MLRS as well as bomber aircraft continue to massively shell the AFU-occupied area in the “gut”. The Ukrainian militants are suffering heavy losses on a daily basis.

▪️ Despite the AFU commanders’ declarations of successes in the south, the number of losses is disproportionate to the results. This is shown by the reduction in the number of manpower sent to slaughter to maintain the defensive lines on the left bank of the #Ingulets River.

▪️ AFU units are building strongholds at #Bereznegovatoye station and establishing communications with the settlement. Pioneer Forces are trying to restore the pontoon crossings over the #Ingulets south of the village, which were lost due to the rising water level of the river. 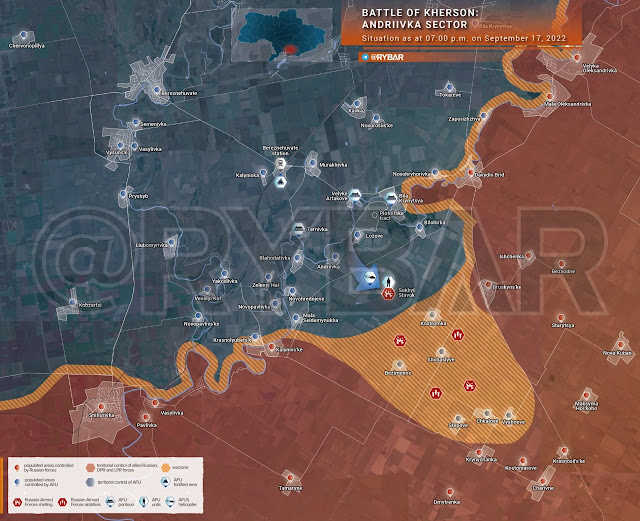 #YURI The window of opportunity for a threatening attack in Zaporozhye is closed for the AFU, as the defence line is manned by the first-class Russian units with enought reserves, which unfortunately was not the case in Balakleya/Izyum. Increased UAV capabilities of the Russian reconnaissance noted, and later in the autumn may become a nightmare for the AFU. The level of threat in Kherson region diminishing. Two attacks in Kherson region were thwarted on approach or before execution.  Attack near Donetsk/Peski, too. Krasni Liman holds on, even though the enemy have not abandoned its attempts to attack. Eastern part of Kupyansk is under Russian control.

The Ukr claimed yesterday that they captured the east section of Kupanjsk. A video claiming Ukr soldiers were in east Kupanjsk was doing the rounds on their channels. But no flags were raised and it was only a few soldiers on foot.

What that likely means is their recon groups are able to enter parts of the town. Although they were reportedly pushed back later on.

Reports of a Ukr grouping concentrating further North from Kupanjsk. Probably aiming to attack towards the small town of Dvorichne, cut the supply road & railway and threaten Kupanjsk from the North 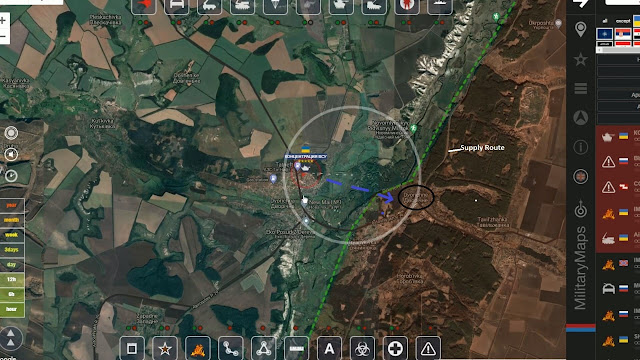 The Ukr claimed yesterday that they captured the east section of Kupanjsk. A video claiming Ukr soldiers were in east Kupanjsk was doing the rounds on their channels. But no flags were raised and it was only a few soldiers on foot.

What that likely means is their recon groups are able to enter parts of the town. Although they were reportedly pushed back later on.

Reports of a Ukr grouping concentrating further North from Kupanjsk. Probably aiming to attack towards the small town of Dvorichne, cut the supply road & railway and threaten Kupanjsk from the North

Allied forces are changing methods and approaches in response to Ukrainian actions — the main theses of D. Pushilin’s daily speech:

▪️Donetsk, Gorlovskoe, Ugledarskoye directions – no changes.
▪️Small progress in the Artemovsk direction
▪️Ukrainian militants are shelling Krasny Liman and Yampol.
▪️The surrender of Dibrovo and Shchurovo is a Ukrainian fake. The battles for settlements continue.
▪️Allied forces prevented an attempt by Ukrainian Nazis to establish a crossing in the Studino area. About 70 militants and 18 vehicles were destroyed.

There are two wars going on:

1. Physical war by the US against Russia to the last Ukrainian.

2. Economic war by the US against Russia to the last European.

But the Ukrainians and Europeans do not understand this yet. And when they do, it may be too late.

I say this with all responsibility: Ukraine is within unnatural borders, and it must give BACK its territories to neighboring countries, Carpathian Ruthenia, Hungary – Galicia, Poland – Bukovina, Romania, and Donbass and Crimea, Russia, these are all territories of other states – Romanian ex-Minister of Foreign Affairs Andrei Marga.

According to an article in the Wall Street Journal, Ukrainian military began to complain about the losses from the use of Iranian kamikaze drones “Shahed-136″ aka “Geran-2″ by Russian troops against them. They write that only in the zone of responsibility of the Ukrainian 92nd brigade, as a result of strikes by these drones, two 152-mm self-propelled howitzers, two 122-mm self-propelled howitzers, as well as two armored personnel carriers, and before that also a 155-mm the towed M777 howitzer was hit by a similar drone. Well, at the same time, they want to receive from the United States and its allies more advanced technologies for protecting against drones, or for them to intervene and somehow disrupt further deliveries of Iranian drones to Russia. 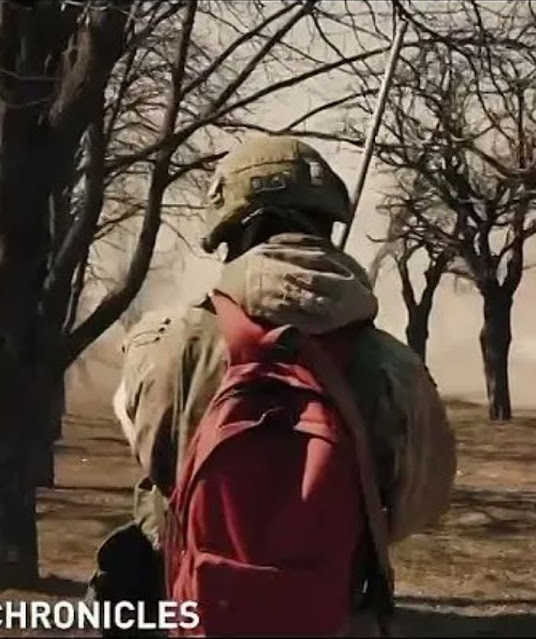 The #Russian Marine commander (call sign #Struna (String)), well known from the fighting in #Mariupol with his red backpack ðŸŽ’, will go back in fight!
After rehabilitation he is ready for action and has new drinking skills ðŸ» -his mate Andrey Filatov (war correspondent) reported.

He lost his right leg when he stepped on a land mine.