By The Light In The Dark Place
Contributor profile | More stories

As featured in National Geographic’s Pharaohs of The Sun, the limestone Ancient Egyptian hieroglyph of The ‘House Altar’ of Akhenaten, Nefertiti and Three of their Daughters is currently housed in the Egyptian Museum of Berlin, Germany and dates back to The New Kingdom, Amarna period, 18th dynasty, c.1340 BCE.

This monumental hieroglyph has now been decrypted in the documentary series Kingdom Divided: Out of the Darkness & Into the Light by Jonathan Kleck.

Its secrets have been unlocked through a series of supernatural image transcriptions and a gift of wisdom from above solving the riddle of ages: the origin of the human race!

Kingdom Divided: Out of the Darkness & Into the Light  [COMPLETE DOCUMENTARY]

“This is a story about the human race:  A Kingdom Divided.

Jesus said any kingdom divided against itself is brought to desolation; a house divided cannot stand.

What is it about the human race as a species? – Our advances in technology are used for the military-industrial complex, in order to destroy ourselves.

It does make sense.. somethings wrong…

What would make brother turn against brother?

Why would a species destroy itself?” – (Prelude to Kingdom Divided DVD)

FEATURED DOCUMENTARY: Kingdom Divided: Out of the Darkness & Into the Light 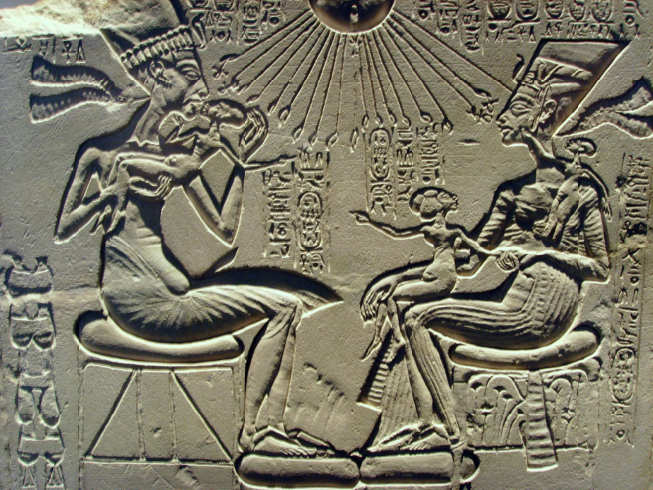 Description from the Egyptian Museum Berlin:  New Kingdom, Dynasty 18, ca. 1340 BC Limestone Amarna Height 32,5 cm, Inv.-No. 14145 This small stele, probably used as a home altar, gives an seldom opportunity to view a scene from the private live of the king and queen. Akhenaten and Nefertiti are shown with the three oldest of their five daughter. While the daughters are being held and caressed by their parents the placement of the god Aten in the centre of the scene reminds of the official monotheistic religion in the Amarna period. Aten is represented as a sundisc with sunrays ending in hands proffering ‘ank’-signs (life-signs) to the royal couple.

Only through the intercession of Nefertiti and Akhenaten could ordinary people partake in the divine salvation. The body forms shown on the relief, the overlong proportions, wide hips, thin legs and the forward curved necks, are typical of the early Amarna artistic style.

Like his father before him, Amenhotep IV marries a commoner, Nefertiti, whose preserved portraits do justice in every respect to her name “the beautiful one has come”. Before long they decide to build a new residence in Middle Egypt and there Amenhotep IV changes his name to Akhenaten (“Aten is pleased”) and gives homage together with his wife to the single god Aten, depicted as a sun disc with hands dangling at the ends of sunrays, holding symbols of life to the noses of the royal couple. A large number of craftsmen and artists settled in the new town in order to implement the new style of art propounded by the king. After a regency of just 17 years Akhenaten died, his town was abandoned and Egypt returned to its former gods. [1] Source: http://www.egyptian-museum-berlin.com/c52.php

HIEROGLYPH DECRYPTION of The ‘House Altar’ of Akhenaten, Nefertiti and Three of their Daughters

The Face of ‘The Evil One’:

The face of ‘the evil one’ is similar to The Deus Ex Machina “god from the machine” in The Matrix movies - it is an evil collective consciousness that comes from beneath.

The spirit trapped in hell looks just like this firey scene from The Matrix Revolutions, “Look past the flesh and see your enemy.” 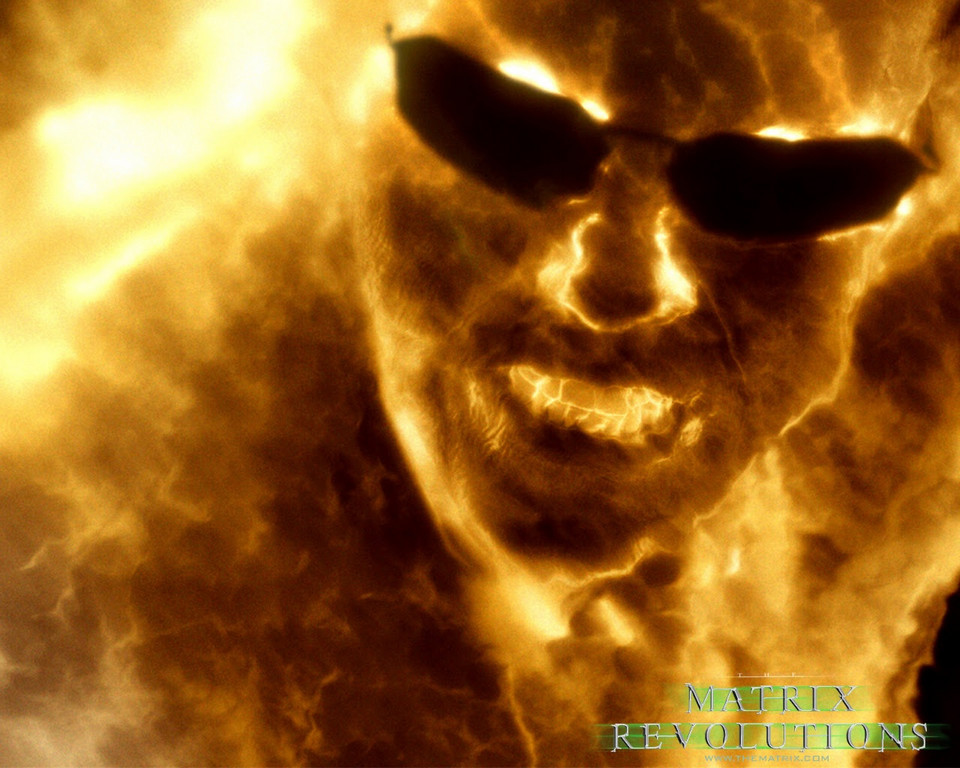 “31 When the Son of man shall come in his glory, and all the holy angels with him, then shall he sit upon the throne of his glory:

32 And before him shall be gathered all nations: and he shall separate them one from another, as a shepherd divideth his sheep from the goats: 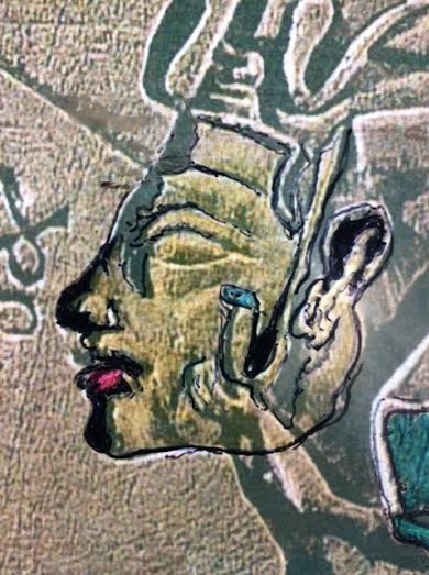 “34 Then shall the King say unto them on his right hand, Come, ye blessed of my Father, inherit the kingdom prepared for you from the foundation of the world:

“When ye therefore shall see the abomination of desolation, spoken of by Daniel the prophet, stand in the holy place, (whoso readeth, let him understand:)” - Matthew 24:15 (KJV Holy Bible) 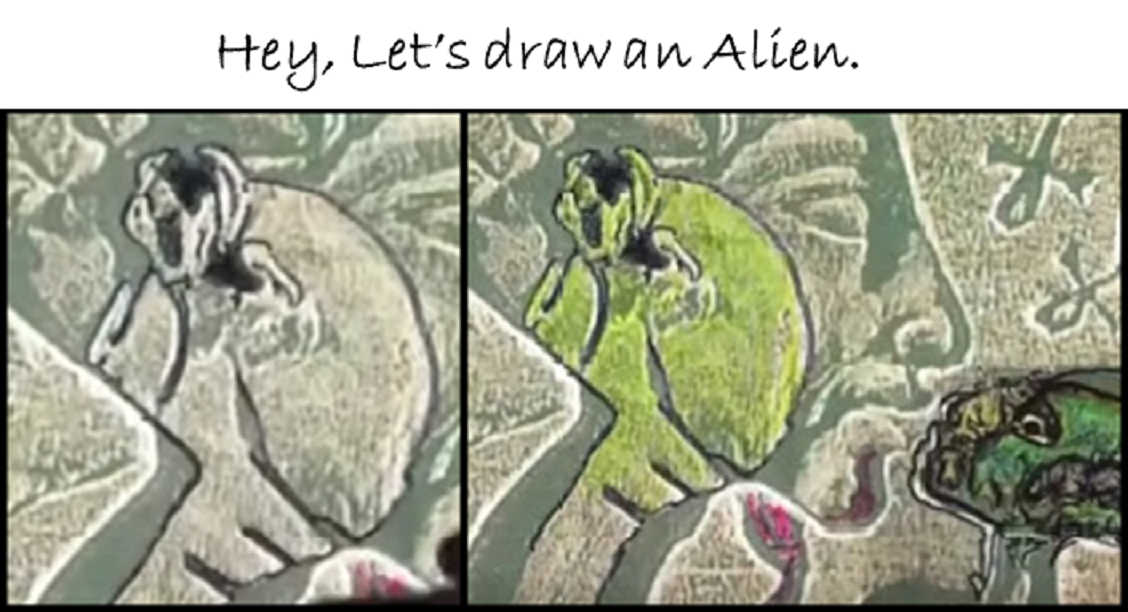 “And arms shall stand on his part, and they shall pollute the sanctuary of strength, and shall take away the daily sacrifice, and they shall place the abomination that maketh desolate.” - Daniel 11:31 (KJV Holy Bible)

The abomination that causes desolation is the serpent seed within the human genome – this mystery was revealed by the LORD God to Jonathan Kleck.

“And whereas thou sawest iron mixed with miry clay, they shall mingle themselves with the seed of men: but they shall not cleave one to another, even as iron is not mixed with clay.” - Daniel 2:43 (KJV Holy Bible)

There are two different races of beings at war:  the serpent race is hunting the sheep race!

The sheep are Christians and the serpent race is being run by Satan. 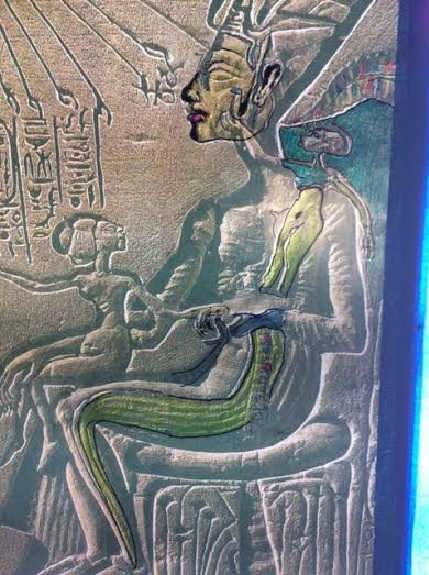 Here is ‘this guy’ being eaten by 3 serpents:

Inside the head of the child: egg / baby reptile / dead sheep

A sheep and a baby reptile are both inside the egg head of the child! 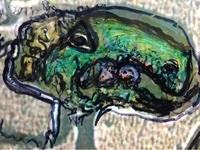 “And the LORD God said unto the serpent, Because thou hast done this, thou art cursed above all cattle, and above every beast of the field; upon thy belly shalt thou go, and dust shalt thou eat all the days of thy life:

And I will put enmity between thee and the woman, and between thy seed and her seed; it shall bruise thy head, and thou shalt bruise his heel.” - Genesis 3:14-15 (KJV Holy Bible) 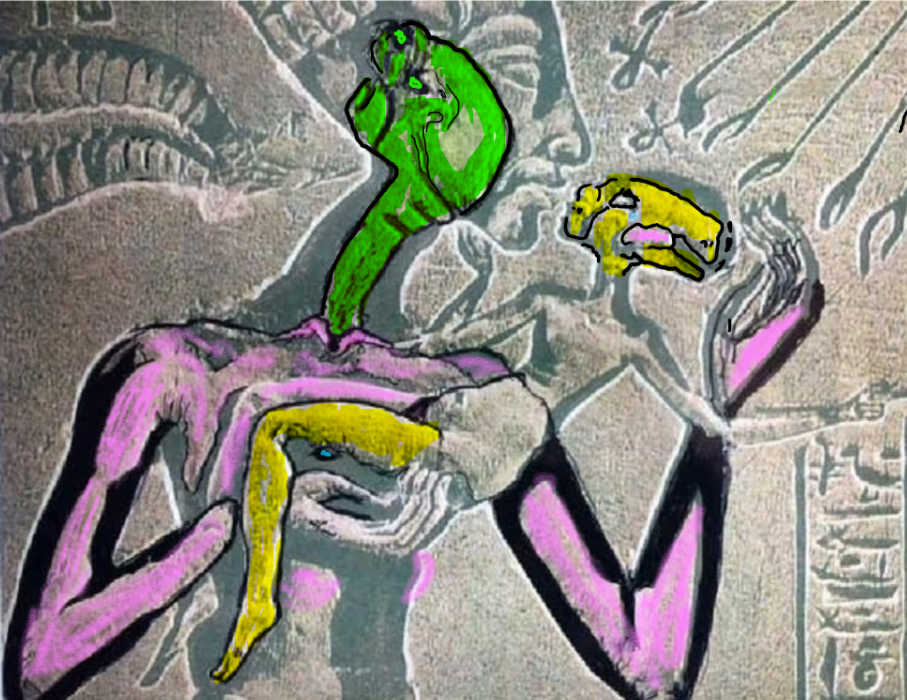 Note: The purpose of The Lord Jesus Christ crucifixion is to slay this enmity and form one new man inside of you from the two.

“Having abolished in his flesh the enmity, even the law of commandments contained in ordinances; for to make in himself of twain one new man, so making peace;

And that he might reconcile both unto God in one body by the cross, having slain the enmity thereby:” - Ephesians 2:15-16 (KJV Holy Bible)

The creature has a turban on its head colored in red. The creature is stealing the breath of its own child because the flesh system is spiritually cannibalistic.

For all of the high-resolution images revealing the mystery of all mysteries decoded from the 1340 B.C. Ancient Egyptian hieroglyph please see: Decryption of the Egyptian Hieroglyph from 1340 BC known as the ‘House Shrine’.

The Akhenaten Hieroglyph that the Lord God used Jonathan to decrypt exposed the Enemy’s agenda in plain sight. The main agenda being the consumption of humans by another race of beings that have come down to manipulate the DNA of mankind by interbreeding.

Micah 3:3 “Who also eat the flesh of my people, and flay their skin from off them; and they break their bones, and chop them in pieces, as for the pot, and as flesh within the caldron.”

This segment shows the ‘mystery of iniquity’ that Paul alludes to, our dual natures being the manifestation of having been infected by the fallen angels DNA thousands of years ago.

Genesis 6:4 (KJV Holy Bible) “There were giants in the earth in those days; and also after that, when the sons of God came in unto the daughters of men, and they bare children to them, the same became mighty men which were of old, men of renown.”

Genesis 6:4 tells us that the somehow the Nephilim survived the Flood of Noah when it says “and also afterward”, this is evidenced by the giants Joshua and his spies saw in the Promised Land as well as the six-fingered clans Jonathan was up against in the books of Chronicles Samuel.

1 Chronicles 20:6 “And yet again there was war at Gath, where was a man of great stature, whose fingers and toes were four and twenty, six on each hand, and six on each foot: and he also was the son of the giant.”

We also welcome you to visit: THIS IS IT Be4theFire