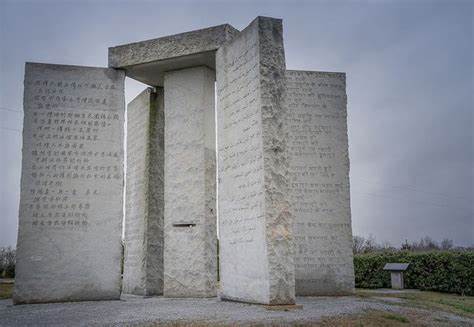 The True Identity of The Georgia Guidestone Designer – In 1979, at the height of the Cold War between the U.S. and the Soviet Union, a mysterious stranger appeared in the remote town of Elberton, Georgia. The man introduced himself as R.C. Christian (a pseudonym). He claimed to represent a small group who wanted to erect a monument to inspire a forthcoming “Age of Reason.” The monument was named the Georgia Guidestones. Written on the great granite stones are ten commands or “guides”.

But the first command calls for a reduction of the world population to a mere 500 million. In order to achieve this, billions of people would have to die. Many have wondered: is the monument designed to inspire wisdom? Or to launch a global genocide and a New World Order? Researchers have wondered for decades about the true identity of R. C. Christian and the purpose of his mysterious structure. After a five-year investigation, this powerful documentary solves the mystery of who R. C. Christian really was.