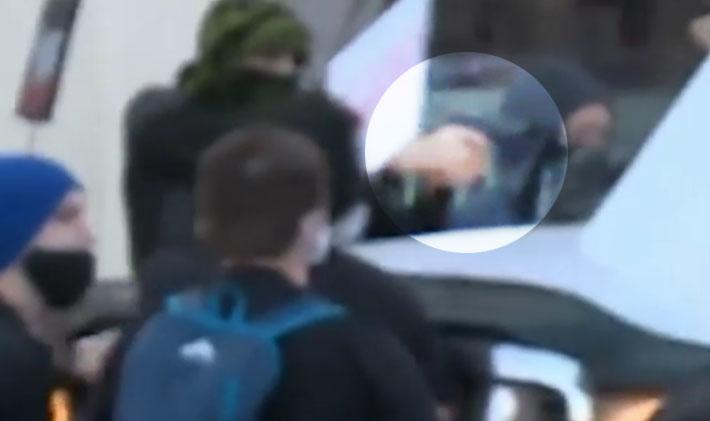 A 60-year-old man was put into the hospital after a protester fired a shot into his SUV at a Provo, Utah BLM rally on Monday.

Footage shows a white Ford Excursion pushing its way past a group of protesters blocking the intersection of Center Street and North University. As the driver is nearly free of the group, a masked man dressed in black-bloc attire can be seen firing a handgun into the cab.

A video of the confrontation with the white Excursion was captured by a Daily Universe student journalist, Lisi Merkley. In the video, the vehicle can be seen pushing through protesters attempting to gather in front of it, picking up speed as it goes while protesters cry out. At least one person falls to the ground before the SUV speeds away.

Another video by KSL-TV shows what appears to be a man in a mask pointing a gun at the passenger side of the white Excursion as it pushes forward. A loud popping sound is heard and a flash is seen from the barrel of the gun.

Protester Betsy Croft, who witnessed the incident with the SUV, claimed that there were “three to four cars that have been trying to run into the groups of people that are congregating at the main intersections in Provo,” adding “This is a peaceful protest so that kind of action is unwarranted and clearly an attempt to be violent.”

The driver of the SUV underwent surgery and has non-life threatening injuries, according to KUTV. Police have yet to locate a suspect.