During the last 2.6 million years of Earth’s climate has alterd between glacial and interglacial states. As such, there have been times in which the transition between the two climate states appeared with either regular or irregular periodicity. AWI researcher Peter Köhler has now discovered that the irregular appearance of interglacials has been more frequent than previously thought. His study makes a significant contribution to our understanding of Earth’s fundamental climate changes.

In order to understand human beings’ role in the development of our current climate, we have to look back a long way, since there has always been climate change – albeit over vastly different timescales than the anthropogenic climate change, which is mainly due to the use of fossil fuels over the past 200 years. Without humans, for millions of years, climate altered between glacial and interglacial states over periods of many thousands of years, mainly because of the Earth’s tilt which changes by a few degrees with a periodicity of 41,000 years. This in turn changes the angle at which the sun’s rays strike Earth – and as such the energy that reaches the planet, especially at high latitudes in summer.

However, there is strong evidence that during the course of the last 2.6 million years, interglacials have repeatedly been ‘skipped’. The Northern Hemisphere – particularly North America – remained frozen for long periods, despite the angle of the axial tilt changing to such an extent that more solar energy once again reached Earth during the summer, which should have melted the inland ice masses. This means Earth’s tilt can’t be the sole reason for Earth’s climate to alter between glacial and interglacial states.
Aerial view of the Beyond EPICA camp 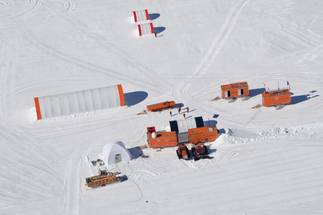 In order to solve the puzzle, climate researchers are investigating more closely at what points in Earth’s history irregularities occurred. Together with colleagues at Utrecht University, physicist Peter Köhler from the Alfred Wegener Institute (AWI) has now made a significant contribution towards providing a clearer picture of the sequence of glacial and interglacial periods over the last 2.6 million years.

Köhler’s study is particularly interesting because he re-evaluated a well-known dataset that researchers have been using for several years – the LR04 climate dataset – yet arrived at completely different conclusions. This dataset consists of a global evaluation of core samples from deep-sea sediments that are millions of years old, and includes measurements from the ancient shells of microscopic, single-celled marine organisms – foraminifera – that were deposited on the ocean floor. Foraminifera incorporate oxygen from the seawater into their calcium shells. But over millennia, the level of specific oxygen isotopes – oxygen atoms that have differing numbers of neutrons and therefore different masses – varies in seawater.

18O reveals what the world was like in the past

The LR04 dataset contains measurements of the ratio of the heavy oxygen isotope 18O to the lighter 16O. The ratio of 18O/16O stored in the foraminifera’s shells depends on the water temperature. But there is also another effect that leads to relatively large amounts of 18O being found in the foraminifera’s shells in glacial periods: when, during the course of a glacial period, there is heavy snowfall on land, which leads to the formation of thick ice sheets, the sea level falls – in the period studied, by as much as 120 m. Since 18O is heavier than 16O, water molecules containing this heavy isotope evaporate less readily than molecules containing the lighter isotope. As such, comparatively more 18O remains in the ocean and the 18O content of the foraminifera shells increases.

“If you take the LR04 dataset at face value, it means you blur two effects – the influence of ocean temperature and that of land ice, or rather that of sea level change,” says Peter Köhler. “This makes statements regarding the alternation of the glacial periods uncertain.” And there is an additional factor: climate researchers mainly determine the sequence of glacial periods on the basis of glaciation in the Northern Hemisphere. But using 18O values doesn’t allow us to say whether prehistoric glaciation chiefly occurred in the Northern Hemisphere or in Antarctica.
Aerial view of the Beyond EPICA camp 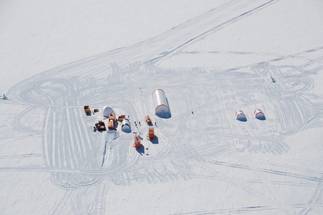 In an attempt to solve this problem, Köhler and his team evaluated the LR04 dataset in a completely different way. The data was fed into a computer model that simulates the growth and melting of the large continental ice sheets. What sets it apart: the model is capable of separating the influence of temperature and that of sea level change on the 18O concentration.

Furthermore, it can accurately analyse where and when snow falls and the ice increases – more in the Northern Hemisphere or in Antarctica. “Mathematicians call this separation a deconvolution,” Köhler explains, “which our model is capable of delivering.” The results show that the sequence of glacials and interglacials was irregular even in the period 2.6 to 1.0 million years ago – a finding that could be crucial in the coming years.
As part of the ongoing major EU project ‘BE-OIC (Beyond EPICA Oldest Ice Core)’, researchers are drilling deeper than ever before into the Antarctic ice. With the oldest ice core recovered to date, ‘EPICA’, they have ‘only’ travelled back roughly 800,000 years into the past. The ancient ice provides, among other things, information on how much carbon dioxide Earth’s atmosphere contained at that time. With ‘Beyond EPICA’ they will delve circa 1.5 million years into the past. By combining the carbon dioxide measurements with Köhler’s analyses, valuable insights can be gained into the relation between these two factors – the fluctuations in the sequence of glacials and the carbon dioxide content of the atmosphere. And this can help us understand the fundamental relationship between greenhouse gases and climate changes in Earth’s glacial history.
Contacts and sources:
Ulrike Windhövel
Alfred Wegener Institute, Helmholtz Centre for Polar and Marine Research.