Portable audio recording solutions abound, and many recently released devices have done a lot to improve the convenience and quality of sound recording devices you can carry in your pocket – spurred in part by smartphones and their constant improvement in video recording capabilities. A new device from Austria’s mikme, the mikme pocket (€369.00 or just under $450 USD), offers a tremendous amount of flexibility and quality in a very portable package, delivering what might just be the ultimate pocket sound solution for reporters, podcasters, video creators and more.

mikme pocket is small – about half the size of a smartphone, but square and probably twice as thick. It’s not as compact as something like the Rode Wireless GO, but it contains onboard memory and a Bluetooth antenna, making it possible to both record locally and transmit audio directly to a connected smartphone from up to three mikme pockets at once.

The mikme pocket features a single button for control, as well as dedicated volume buttons, a 3.5mm headphone jack for monitoring audio, a micro-USB port for charging and for offloading files via physical connection, and Bluetooth pairing and power buttons. It has an integrated belt clip, as well as a 3/8″ thread mount for mic stands, with an adapter included for mounting to 1/4″ standard camera tripod connections.

In the box, mikme has also included a lavalier microphone with a mini XLR connector (which is the interface the pocket uses) and a clip and two windscreens for the mic. They also offer a ‘pro’ lavalier mic as a separate, add-on purchase (€149.00 or around $180 USD), which offers improved performance vs. the included lav in terms of audio quality and dynamic range. 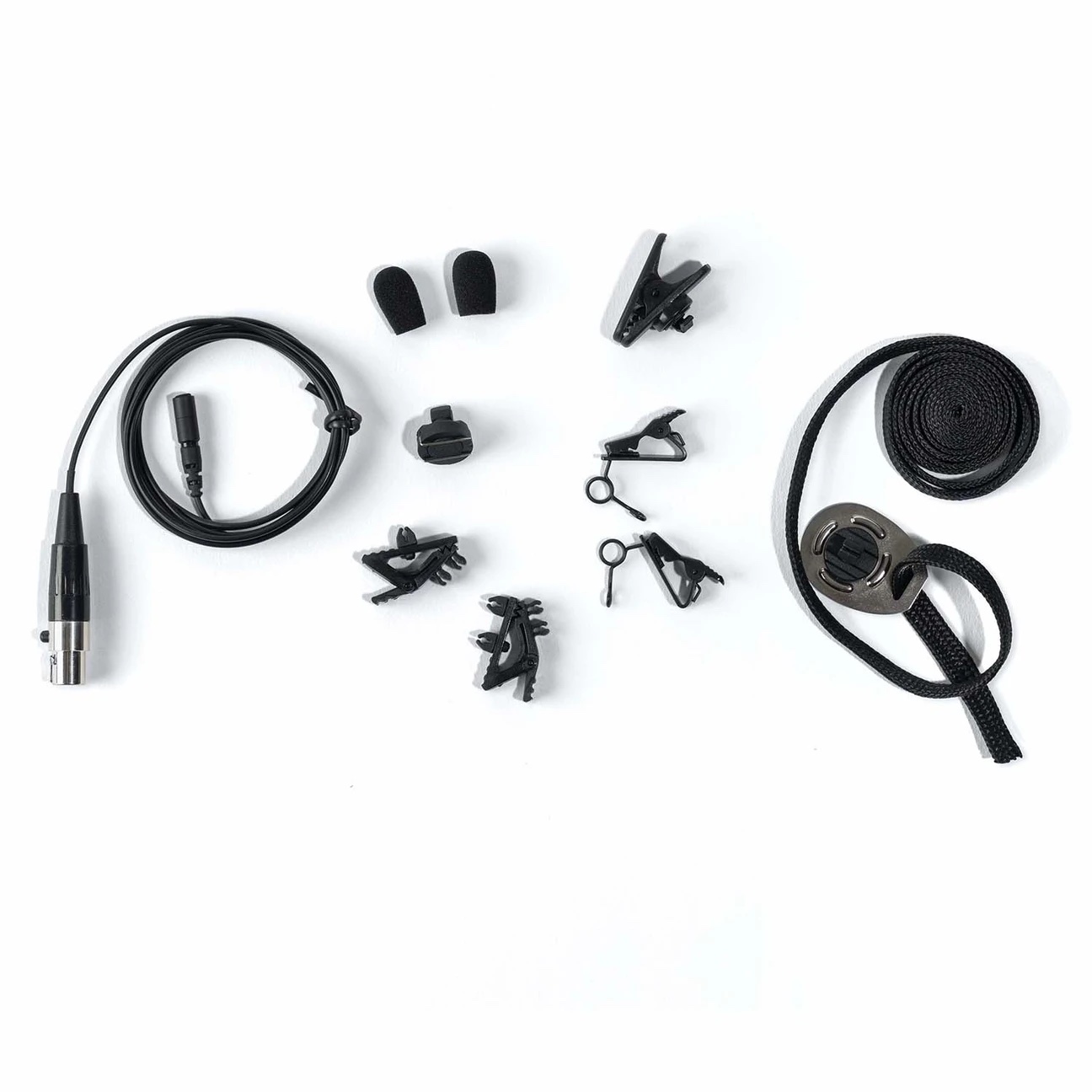 The internal battery for the mikme pocket lasts up to 3.5 hours of recording time, and it can last for more than six months in standby mode between recordings, too.

The mikme pocket is a pretty unadorned black block, but its unassuming design is one of its strengths. It has a textured matte feel which helps with grittiness, and it’s easy to hide in dark clothing, plus the integrated belt clip works exactly as desired ensuring the pack is easy secured to anyone you’re trying to wire for sound. It features a single large button for simplified control, which also easily shows you its connectivity status using an LED backlight.

Controls for more advanced functions like Bluetooth connectivity, as well as the micro-USB port, are located on the bottom where they’re unlikely to be pressed accidentally by anyone during recording. The mini XLR interface for microphones means that once a mic is plugged it, it’s also securely locked in place and won’t be jostled out during sessions.

You can use the mikme pocket on its own, thanks to its 16GB of built-in local storage, but it really shines when used in tandem with the smartphone app. The app allows you to connect up to three pockets simultaneously, and provides a built-in video recorder so you can take full advantage of the recording capabilities of modern devices like the iPhone 12 to capture real-time synced audio while you film effortlessly. The mikme pocket and app also have a failsafe built in for filling in any gaps that might arise from any connection dropouts thanks to the local recording backup.

In terms of audio quality, the sound without adjusting any settings is excellent. Like all lavalier mics, you’ll get better results the closer you can place the actually mic capsule itself to a speaker’s mouth, but the mikme pocket produced exceptional clean-sounding, high-quality audio right out of the box – in environments that weren’t particularly sound isolated or devoid of background noise.

The included mini XLR lav mic is probably good enough for the needs of most amateur and enthusiast users, while the lavalier pro is a great upgrade option for anyone looking to make the absolute most of their recordings, especially with post-processing via desktop audio editing software. The mikme app has built-in audio tweaking controls with a great visual interface that allows you to hear the effects of processing tweaks in real-time, which is great for maximizing sound quality on the go before sharing clips and videos directly from your device to social networks or publishing platforms.

From on-phone shotgun mics, to handheld recorders and much more, there are plenty of options out there for capturing audio on-the-go, but the mikme pocket is the one that offers the best balance of very high-quality sound that’s essentially immediately ready to publish, in a package that’s both extremely easy to carry anywhere with you, and that offers durability and user-friendliness to suit newcomers and experts alike.

Loading...
"Not by might, nor by power, but by my spirit, saith the Lord of hosts." Zechariah 4:6
BEFORE IT'S NEWS ON TELEGRAM
GET THE TELEGRAM APP - https://telegram.org/ JOIN OUR CHANNEL - https://t.me/BeforeitsNews
Read it..
BEFORE IT'S NEWS
SIGN UP FOR OUR NEWSLETTER
Today's Top Stories
US Military at the White House Arresting Congress
US Military at the White House Arresting Congress
Danger! Overnight U.S. National Security Threat Goes Critical! What Did Biden Just Do!?
Simon Parkes & Charlie Ward: The Strange Inauguration Panel
Situation Update, Jan 27th, 2021 - Covid "Science" Insanity: Anal Swabs & Face Diapers! - Mike Adams Must Video
Clif High: Year Woo/Woo War - "Something" Will Occur Concerning the US Population (Video)
Trump's Rounding Up The Army To Take Out Biden, All Traitors, And Foreign Enemies!! God's Plan Is Shining!! (Must Video)
Senator Roy Blunt Arrested?
Benjamin Fulford: Historical Change Is Coming
Biden Offers $10,000,000 Bounty for Jeffrey “the Kraken” Epstein, Dead or Alive
Loading...
Featured
Best & Taylor Intel (1/27/2021): The Rise of Evil — Who are the Handlers?
About 12,000 criminals a month are going to be released into US communities!
Traitors Realizing They Fell Into The Trap!! Global Allies Sending Message To Deepstate: "You F#@$eD Up"!!! (Must Video)
Trump's Rounding Up The Army To Take Out Biden, All Traitors, And Foreign Enemies!! God's Plan Is Shining!! (Must Video)
Amazing Polly: Secret Service Fail At Capitol Before Inauguration! - Must Video
David Wilcock Live 1/27: Q! The Joan of Arc Timeline Requires a "Scare Event" Before It Gets Good
US Military at the White House Arresting Congress
Lin Wood Reports: MEME Police are REAL! XELive
BLOODY HELL: Fraudulent ☭ Biden Administration INDICTS Social Media Influencer For A Funny Meme
Warning!! This Is Urgent!! You & Your Families Life Depends On Seeing This! - Must Video
Top Global
Persian Gulf update 01/27/2021..Secretary of State Antony Blinken says Taking 'very close' look at Houthi designation
Globalist WEF Billionaires Have a Message For Us Little People! Here’s What They Said..
Covid Mask: The Psychology Of Surrender?
The Fog Of COVID War – Locking Down The Healthy
Bilateral Relations Between Mexico and the US May Not Improve, Despite Biden's Promises
China Expert Gordon Chang Says the US Must Cut All Ties to the Regime!
How Will Iran’s Return to the Nuclear Deal Affect Global Oil Prices?
Ray Dalio: Be Ready for a Terrible Societal Collapse and Economic Collapse! - Epic Economist Must Video
In Just a Few Days, Biden Has Brought the US Much Closer to a War With China
DHS Issues New Terror Advisory On “Domestic Violent Extremists” Who “Object To Presidential Transition”
Loading...
Top Alternative
Juicing Technique Could Influence Healthfulness of Fresh Squeezed Juice
Invasion Of The Body Snatchers: The Chicom Plot to Commit Total Genocide Against The People Of The United States! - Dave Hodges +Video
Democrats introduce bill to make Washington D.C. the 51st State
“Every Man Will Do His Duty.”
What will police/military do in a WROL situation?
Americans will soon be forced into a guerrilla war of survival – Can America win against the globalist occupation forces?
Is Trump Impeachment Constitutional? Keystone Pipeline Controversy, News & More
Pineal Gland & Spirit Molecule in Bible Is Connection to Source & How The Archons Hijacked It
Covid Mask: The Psychology Of Surrender?
The Four States In America To Live Off The Grid