Researchers at Tel Aviv University were able to reconstruct the nutrition of stone age humans. In a paper published in the Yearbook of the American Physical Anthropology Association, Dr. Miki Ben-Dor and Prof. Ran Barkai of the Jacob M. Alkov Department of Archaeology at Tel Aviv University, together with Raphael Sirtoli of Portugal, show that humans were an apex predator for about two million years.

Only the extinction of larger animals (megafauna) in various parts of the world, and the decline of animal food sources toward the end of the stone age, led humans to gradually increase the vegetable element in their nutrition, until finally they had no choice but to domesticate both plants and animals – and became farmers.

“So far, attempts to reconstruct the diet of stone-age humans were mostly based on comparisons to 20th century hunter-gatherer societies,” explains Dr. Ben-Dor. “This comparison is futile, however, because two million years ago hunter-gatherer societies could hunt and consume elephants and other large animals – while today’s hunter gatherers do not have access to such bounty. The entire ecosystem has changed, and conditions cannot be compared. We decided to use other methods to reconstruct the diet of stone-age humans: to examine the memory preserved in our own bodies, our metabolism, genetics and physical build. Human behavior changes rapidly, but evolution is slow. The body remembers.”

In a process unprecedented in its extent, Dr. Ben-Dor and his colleagues collected about 25 lines of evidence from about 400 scientific papers from different scientific disciplines, dealing with the focal question: Were stone-age humans specialized carnivores or were they generalist omnivores? Most evidence was found in research on current biology, namely genetics, metabolism, physiology and morphology.

“One prominent example is the acidity of the human stomach,” says Dr. Ben-Dor. “The acidity in our stomach is high when compared to omnivores and even to other predators. Producing and maintaining strong acidity require large amounts of energy, and its existence is evidence for consuming animal products. Strong acidity provides protection from harmful bacteria found in meat, and prehistoric humans, hunting large animals whose meat sufficed for days or even weeks, often consumed old meat containing large quantities of bacteria, and thus needed to maintain a high level of acidity.

Another indication of being predators is the structure of the fat cells in our bodies. In the bodies of omnivores, fat is stored in a relatively small number of large fat cells, while in predators, including humans, it’s the other way around: we have a much larger number of smaller fat cells. Significant evidence for the evolution of humans as predators has also been found in our genome. For example, geneticists have concluded that “areas of the human genome were closed off to enable a fat-rich diet, while in chimpanzees, areas of the genome were opened to enable a sugar-rich diet.”

The evolution of the human trophic level during the Pleistocene as we interpret it, based on the totality of the evidence. 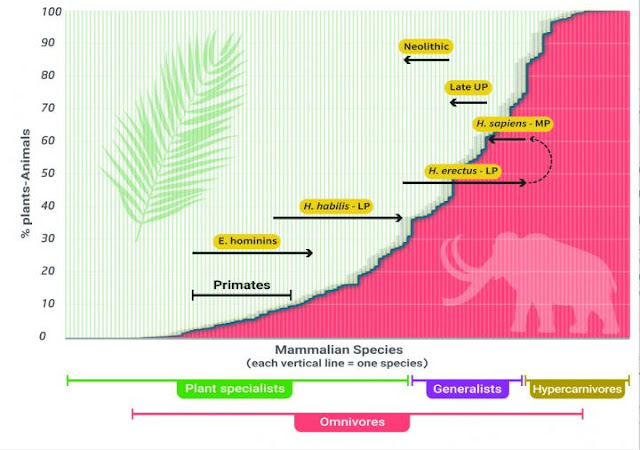 Evidence from human biology was supplemented by archaeological evidence. For instance, research on stable isotopes in the bones of prehistoric humans, as well as hunting practices unique to humans, show that humans specialized in hunting large and medium-sized animals with high fat content. Comparing humans to large social predators of today, all of whom hunt large animals and obtain more than 70% of their energy from animal sources, reinforced the conclusion that humans specialized in hunting large animals and were in fact hypercarnivores.

“Hunting large animals is not an afternoon hobby,” says Dr. Ben-Dor. “It requires a great deal of knowledge, and lions and hyenas attain these abilities after long years of learning. Clearly, the remains of large animals found in countless archaeological sites are the result of humans’ high expertise as hunters of large animals. Many researchers who study the extinction of the large animals agree that hunting by humans played a major role in this extinction – and there is no better proof of humans’ specialization in hunting large animals. Most probably, like in current-day predators, hunting itself was a focal human activity throughout most of human evolution. Other archaeological evidence – like the fact that specialized tools for obtaining and processing vegetable foods only appeared in the later stages of human evolution – also supports the centrality of large animals in the human diet, throughout most of human history.”

The multidisciplinary reconstruction conducted by TAU researchers for almost a decade proposes a complete change of paradigm in the understanding of human evolution. Contrary to the widespread hypothesis that humans owe their evolution and survival to their dietary flexibility, which allowed them to combine the hunting of animals with vegetable foods, the picture emerging here is of humans evolving mostly as predators of large animals.

“Archaeological evidence does not overlook the fact that stone-age humans also consumed plants,” adds Dr. Ben-Dor. “But according to the findings of this study plants only became a major component of the human diet toward the end of the era.”

Evidence of genetic changes and the appearance of unique stone tools for processing plants led the researchers to conclude that, starting about 85,000 years ago in Africa, and about 40,000 years ago in Europe and Asia, a gradual rise occurred in the consumption of plant foods as well as dietary diversity – in accordance with varying ecological conditions. This rise was accompanied by an increase in the local uniqueness of the stone tool culture, which is similar to the diversity of material cultures in 20th-century hunter-gatherer societies. In contrast, during the two million years when, according to the researchers, humans were apex predators, long periods of similarity and continuity were observed in stone tools, regardless of local ecological conditions.

“Our study addresses a very great current controversy – both scientific and non-scientific,” says Prof. Barkai. “For many people today, the Paleolithic diet is a critical issue, not only with regard to the past, but also concerning the present and future. It is hard to convince a devout vegetarian that his/her ancestors were not vegetarians, and people tend to confuse personal beliefs with scientific reality. Our study is both multidisciplinary and interdisciplinary. We propose a picture that is unprecedented in its inclusiveness and breadth, which clearly shows that humans were initially apex predators, who specialized in hunting large animals. As Darwin discovered, the adaptation of species to obtaining and digesting their food is the main source of evolutionary changes, and thus the claim that humans were apex predators throughout most of their development may provide a broad basis for fundamental insights on the biological and cultural evolution of humans.”