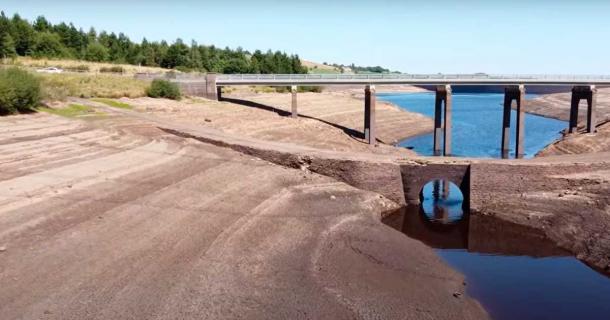 The sunken village of Baitings and its famous packhorse bridge, pictured below the modern car bridge, have been exposed by record drought and heat for the first time since the mid-1950s. Source: YouTube screenshot / velomoho

It’s almost out of a fairy tale, with the added caveat of having the dirty underbelly of global warming revealed yet again! A Yorkshire sunken village with Viking origins has re-emerged after water levels of the reservoir it was under sank alarmingly low after the most recent heatwave in the UK.

The sunken village of Baitings has been underwater since the 1950s when the reservoir was built. And that was the last time one could still cross the original Ripponden Old Bridge.

The Baitings reservoir (also known as the Thruscross reservoir), which was named after a hamlet with Norse origins, was a 20-year-long construction project that reached completion in the mid-1950s in two sections of the River Ryburn valley.

The tiny now-sunken village of Baitings was well known for its centuries-old packhorse bridge that is right below to the modern car bridge of today, both of which were exposed by the drop in water level.

The Baitings settlement became a key stop on the packhorse route through the Pennine Hills, linking Yorkshire with Lancaster, reports The Metro .

The town developed rapidly in the Industrial Revolution, with its flax mill, hydro-powered by the River Ryburn. When the reservoir flooded the town in the 1950s it had long been in decline.

The remains of the mill can be seen year round, but the other sunken village ruins haven’t been exposed at all since the mid-1950s. The reservoir area itself is beautiful, surrounded by woodlands and has impressive views of the moors, and is frequented by walkers and nature-enthusiasts in all seasons. 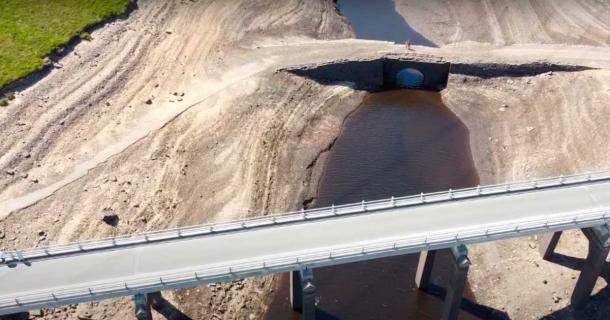 Another view of the 1313-AD packhorse bridge in the sunken village of Baitings, West Yorkshire, England. (YouTube screenshot / velomoho)

A Prolonged Dry Spell: A Devastating Heat Wave and Drought

A spokesperson for Yorkshire Water stated that the Baitings reservoir is the uppermost reservoir built along River Ryburn valley (with the Ryburn reservoir being the lowest). The spokesperson added that, “Water from it feeds into Fewston, Swinsty and down to Eccup. So, in a prolonged dry spell such as we’re having at the moment, and when it’s not being topped up by rainfall in the area, it’s not a surprise levels have dropped.”

Yorkshire Water has also announced a hosepipe (garden hose) ban, it’s first in 27 years, as reservoir water levels fell below fifty percent for the first time since 1995. In fact, it will take “months of sustained rainfall” for water levels to recover. Earlier this week, Thames Water announced a hosepipe ban affecting 15 million people in London and the surrounding area.

In 1989, when the reservoir levels fell 12 meters (39 feet) below normal, a gruesome piece of Yorkshire history was revealed in the mud. The body of Laurence Winstanley, a 23-year-old man who’d last been seen leaving an Oldham pub in 1988, was found on the bed of the reservoir. He had a gunshot wound to the head and was weighted down with a pickaxe. It remains an unsolved murder, where the victim’s body ended up in a sunken village, to this day, reports the Yorkshire Post .

On Friday, the UK government officially declared 2022 to be a drought year, the second time in four years. Swathes of southwestern, southern, central and eastern England, following months of record low rainfall, and unprecedented high temperatures, are experiencing dryness levels last seen in 1935. And parts of Yorkshire and Lancashire have reported 40 degrees Celsius (104 Fahrenheit) temperatures for the first time ever in their history!

Britain’s GMB union, one of largest in the country, called for a maximum temperature of 25 Celsius (77 Fahrenheit) in workplaces, lighter and cooler clothing, and more breaks. Hydration levels in the workplace have also become a serious concern.