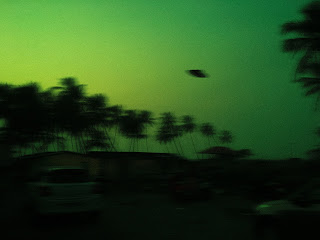 If aliens are in our solar system they should really say hello. Why? The paranoia caused by mysterious visits to Earth could cause serious problems for humans. What paranoia you say? The Department of Defense is expected to release a report about what they call Unidentified Aerial Phenomena. UAP is the new term for what has in the past been called UFOs. Some of what that report will contain has already been leaked. The Pentagon has confirmed that there are several instances of military sightings of UAP that cannot be explained. It seems unlikely the DOD report will say much beyond that, but that alone would be major news.

You can already see the change in media coverage of UAP in terms of tone and number of stories on the subject. The New York Times and Washington Post have been reporting on the military sightings for a couple of years now. In recent days, the New Yorker, NBC, NPR, and other established media outlets have joined in.

There are concerns that China or Russia could be responsible for these UAP, which is alarming from a military perspective. Many of the reports include descriptions of aerial maneuvers that no known human aircraft could accomplish. If humans have that technology the US Department of Defense is concerned, because they don’t. And if the activity is not human, but rather controlled by extraterrestrial intelligence, that raises huge questions: Who are they? What are they doing here?  Do they threaten our security?

All of that creates paranoia and not just for the United States. If China and Russia are not responsible for those UAP, it seems likely they would be quite concerned, as well. And what happens when humans are concerned about their security? Often knee jerk reactions. Ezra Klein has an interesting piece in the New York Times today that talks about those issues.

Nations concerned about their safety could take measures to increase their military technology and resources. They could aim nuclear weapons into space. They could be so busy watching for aliens that they end up having conflicts with each other. You would like to believe that an extraterrestrial mystery would bring us together as humans and that nations would put more resources into scientific research to help answer these questions. But the military buildup seems inevitable in such a situation.

Malevolent aliens would be morons to reveal themselves in such ways before an attack. And if they have the technology to visit out planet, they are probably not dumb. Benevolent aliens might take such UAP actions in order to prepare us slowly for their existence. However, that is only helpful for so long. Now we are headed into a level of concern that could make humans even more dangerous than we already are. So, if aliens have been visiting, it’s time to say hello.

As I point out in my new book- The “The Extraterrestrial Big Hello: A Guide for What to do When the Aliens Introduce Themselves” aliens would want to say hello to all humans at the same time. Making First Contact with one nation could make the event political and quickly turn it into an international relations problem. What should benevolent or at least neutral aliens do? I suggest a welcome to all humans at the same time using the news media and communications networks here on Earth. I explore a few ways to do that in the book.It is available on Amazon worldwide.