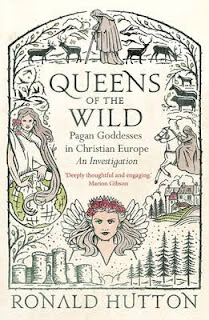 Mother Earth, the Fairy Queen, the Lady of the Night, the Cailleach and the Green Man have all been called deities by people between the medieval and present day. That’s a period in history long after ancient pagan times. Professor Ronald Hutton’s latest book Queens of the Wild – Pagan Goddesses in Christian Europe: An Investigation looks at what these figures represented and why they were important to those who held them in respect. Are they evidence that pre-Christian religions survived through the Middle Ages and into the early modern period?

Well, in the late 19th and most of the 20th century, that was a popular view even among some scholars. Nowadays, academic historians and most modern pagans dismiss that idea – largely because books like Professor Hutton’s own earlier work The Triumph of the Moon.

In Queens of the Wild he considers whether we have been “throwing out the baby with the bathwater”, although he quickly adds that what’s really interesting to study is “the bathwater itself”. By this he means the “background…environment” to customs associated with things like seasonal activities or everyday needs. As publisher Yale says on its website:

“Ronald Hutton explores the history of deity-like figures in Christian Europe. Drawing on anthropology, archaeology, literature, and history, Hutton shows how hags, witches, the fairy queen, and the Green Man all came to be, and how they changed over the centuries… Hutton challenges decades of debate around the female figures who have long been thought versions of pre-Christian goddesses.”

Professor Hutton explains why these are not examples of “surviving paganism”, meaning a persisting pagan religion, although some have aspects of “pagan survival” meaning customs, beliefs or objects taken into Christian society from ancient paganism by people who weren’t actually pagan any more. However, he adds that the set of figures he covers are ones “in the medieval and early modern European imagination which do not seem to fit very well into the categories of pagan or Christian”. Publisher Yale says on its website:

“He makes the compelling case that these goddess figures found in the European imagination did not descend from the pre-Christian ancient world, yet have nothing Christian about them.”

Each of the figures had a cultural importance to the people of the time in which they flourished. That could be due to popular literature, plays and romance tale traditions; they were sometimes used as allegorical figures who represented something but weren’t believed to actually exist. Some served as wish-fulfillment dreams for those in poverty, or they could be transgressive figures of rebellion. Some were thought of as supernatural entities, but not deities.

You might have spotted that one potential god crept in among all those goddesses – the Green Man. He gets covered in a fascinating epilogue, but I’m not going to grumble about a male figure being an afterthought when so often it’s the other way way around. He seems the most elusive to track down in terms of his origin, but it seems the concept of the Green Man as a deity was pretty much created by 19th century scholars using intuitive hunches rather than solid evidence.

The book isn’t anti-paganism. In fact Professor Hutton writes: ”As we know so little about how the divine operates…it may well be that those who adopt or have adopted such a religion…are actually creating, empowering or contacting ‘real’ entities. The problem only comes if those who embrace such beliefs back-project them on a past and declare they are revealing an ancient mystery.” I completely agree that using personal gnosis or intuition as “proof” of history is somewhat back to front, and the gods and goddesses we need now are not necessarily the same gods and goddesses our ancestors needed in the distant past.

Whatever your view of the relationship with history and religious belief, I am sure you will find Queens of the Wild  a fascinating and thought-provoking read. Thoroughly recommended.

I bought my copy of Queens of the Wild at Treadwell’s bookshop in London.