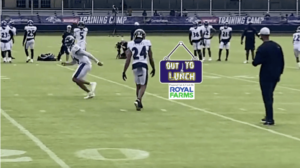 We’re getting there, Flock.

The calendar pages are moving, and we’re just 26 days away from the season opener. The first game of preseason is in the books (extending the mother of all inconsequential winning streaks), and we got to see flashes of what these young players and newcomers can do in purple and black. While we didn’t see anything close to the full complement of players on the field, that was to be expected in an exhibition game, and the clear priority was to let players heal or save themselves for the regular season.

One such healing player took a major step forward yesterday in rejoining the active roster, and it did my heart good to see him back out there. The man they call MP Juiceman is back to terrorize AFC North quarterbacks.

CB Marcus Peters has passed his physical and returned to practice. https://t.co/Vi2s7lPeyw

Marcus Peters backpedaling on his rehabbed knee in Ravens practice

In offseason interviews, Marcus Peters had initially indicated that he felt he would be ready to go by around the June to July timeframe, and a mid-August return may have just been precautionary to make sure that the team wasn’t forcing him back into action too soon. With his return, there are only a few major names remaining on the PUP list, and I have all of my fingers and toes crossed that this list only gets shorter.

Peters’ return as a vocal leader on defense is certainly going to provide a major boost to the unit, particularly with the younger players who thrive with veteran leadership. Pepe Williams, who has shown similarities to Peters’ gritty style and penchant for trash talk, emphasized what it means to have #24 back in the fold.

“Being a rookie, I look up to the great guys that make plays.” pic.twitter.com/Y5hEVqvDRU

That scrappy secondary would be helped out by the big guys up front providing pressure. One of the major stories from camp this season has been how disruptive the interior D-linemen have looked, and Calais Campbell sounded very confident in that group coming into the season.

Calais Campbell on the Ravens defensive line: “Honestly, this might be the most talented – from top to bottom. … But wow, I mean we’re really 9 deep. All 9 guys in our d-line room can play on Sunday and help us win ball games.”

Campbell also had high praise for a guy who has been something of a camp darling in rookie Travis Jones.

“@bigtrav76 is a stud. He has all the tools to be a special player in this league.” @CalaisCampbell pic.twitter.com/FH9c715Jzu

Attending camp a few days ago, I made it a point to set up close to where the defensive linemen were running individual drills, and I fully concur with Campbell’s assessment. Even from the stands, you can feel the power that TJ throws into his hits, and his technique looks extremely polished for a rookie. If I’m an opposing offensive lineman with Jones rushing from the middle and Odafe Oweh coming off the edge, I’m waking up in a cold sweat thinking about these matchups.

Not to be outdone, though, the offense flexed their own young stud as Isaiah Likely piggybacked off of his great performance with yet another highlight reel catch.

It says a lot about Isaiah Likely that this catch was arguably only his second-best of the day. pic.twitter.com/VfiyOeknAf

It’s all coming together, Flock, and it won’t be long now. Until then, how ‘bout them O’s?

Harbs is loving what he’s seeing from the @Orioles