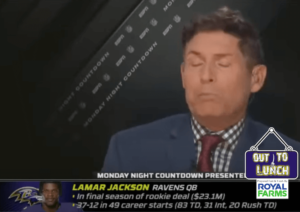 Between signing Marcus Williams and drafting Kyle Hamilton, the Baltimore Ravens’ safety upgrades have been one of the highlights of their offseason. And while Chuck Clark has gotten recent praise for a quietly excellent offseason, Tony Jefferson’s return to form has gone somewhat under the radar.

“You have to believe that he’s there for a reason.”
Things have come full circle for Tony Jefferson who is rejuvenated after four knee surgeries and a return to a place where he feels at his best.
via @TheAthletic https://t.co/RFhmle5YO4

Thankfully, the NFL is starting to take notice of Jefferson’s incredible years-long comeback that has him looking just as good – if not better – than he did during his first stint in Baltimore.

Standout performances against the Bengals and the Rams in 2021 – both elite offenses last year – seem to have built his confidence back up to his pre-injury days. He’s one of the most energetic members of the team, whether he’s in the middle of the action or watching from the sidelines.

“I could have taken the easy road out, but I didn’t.”

After undergoing 4 knee surgeries, @Ravens safety @_tonyjefferson comes in at No. 2 on @PSchrags‘ “Take a Chance on Me” list

Now that he’s wearing glasses and can actually see what he’s doing on the football field, I think his veteran leadership will have an impact in the locker room and whenever he gets in a game.

Steve Young: “@Lj_era8 can be the greatest player in the history of the game.” – if the Ravens develop their passing offense.pic.twitter.com/SESBr4Qjw5

You can watch the clip and go through everything Young says, but the message Ravens fans walked away with was clear: Greg Roman bad.

Is Roman one of the trendy, young offensive coordinators currently taking the league by storm? No, and even if he was, he’d be hired away from the Ravens almost immediately with the success he’s already had with Lamar Jackson.

A coordinator’s job is to design an offensive scheme, implement a playbook and deploy personnel based on the talents they have on the offense, specifically the quarterback. It’s hard to argue that Roman has done anything but that as Baltimore’s OC, which leads me to my next point: the Ravens like their offense this way.

Roman didn’t draft two tight ends, two offensive linemen and zero receivers this year; Eric DeCosta did! The entire team, from EDC on down, thinks they can maximize Jackson’s talents by finding market inefficiencies that make run-oriented players less expensive to acquire. That doesn’t mean they won’t pass the ball, but they’re certainly not overpaying for Kenny Golladay either.

I’ll admit, though, this is very much a prove-it year, for Jackson, Roman and the entire offensive strategy. 2018 and 2019 were proof-of-concept years, with enough success despite injuries in 2020 and 2021 for me to keep the faith.

But now, with younger, fresher running backs, a stronger offensive line and a sneaky-good array of pass-catchers for a renewed Jackson, the offense has everything it needs to work. And it needs to work.

Okay, rant over. Let’s move on to one of my favorite aspects of the Ravens’ overall organization: their professionalism and overall support for the game of football.

One of the best interns I’ve ever had

Personalized thank-yous go a long way, no matter how much we hate doing them. But this kind of outreach doesn’t just make the Ravens look good; it’s good business, too. It’s one of the many subtle ways that the Ravens outpace the NFL in finding the smallest advantages, whether it be attracting undrafted rookies or fostering positive relationships with college staffers to enhance the Ravens’ scouting process.

Having such excellent young players is a major reason why the Ravens haven’t lost a preseason game since 2015, something that one Steelers writer was really upset about.

The Ravens’ preseason winning streak is nothing to celebrate. #Steelers https://t.co/uXaeOqoaub

I know we like to talk about the preseason streak as a point of pride, but I think this writer is missing the forest for the trees. It’s not about the individual preseason wins as a predictive measure of our team’s success every year. Lest we forget, the 0-16 Browns went 4-0 in the preseason.

Instead, it’s about the organization’s annual offseason process that yields an excellent group of backups and depth players that perform well in the preseason. Between their draft management, scouting of undrafted rookies and ability to find veteran diamonds in the rough, the Ravens regularly build the strongest 90-man roster in July and August. And yes, that is something to be proud of, especially when the coaching staff gets groups of players who’ve never played together to win every preseason game, every year!

SO EVERYONE THINKS HARBAUGH STACKS THE DECK WITH STARTERS TO KEEP WINNING BUT REALLY THE STREAK IS A TESTAMENT TO THE QUALITY OF DEPTH PIECES WHO NEVER MADE THE ROSTER LIKE KAI NACUA AND JOSH WOODRUM I MEAN JUST LOOK AT THE SECOND-HALF SCORING MARGINS THAT’S WHERE THE MAGIC IS pic.twitter.com/4SpdFC52CJ

Instead, I think we should be like Noah, who spent his words on Lamar Jackson’s children’s book instead of enviously complaining about the Ravens like, well, a child.

Loading...
"Not by might, nor by power, but by my spirit, saith the Lord of hosts." Zechariah 4:6
BEFORE IT'S NEWS ON TELEGRAM
GET THE TELEGRAM APP - https://telegram.org/ JOIN OUR CHANNEL - https://t.me/BeforeitsNews
Read it..
BEFORE IT'S NEWS
SIGN UP FOR OUR NEWSLETTER
Today's Top Stories
Revisit!! Fox News Reading Of Theory Of Whitehat Military Sting Operation Arrest Of Biden Crime Family And Stolen Election Co-Conspirators, Military Tribunals!!
Q Anon - President Trump - White Hats ~ The World Is About To Change! - Must Video
Situation Update: UN Storm Troopers Takeover London! CCP Double Coup! XI Double On House Arrest! Iodine Tablets Distributed In Poland! Russian Military Build-up! FBI Corruption Runs Deep! - We The People News
Steve Quayle Warns The First Cities To Be Targeted For Nuclear Annihilation Will Be In The United States! - Mike Adams Must Video
This Happened on Both Coasts Yesterday Nearly One Hour Apart!
Major Stuff Happening!!! Virginia, China, London Is the Arrest Happening??
"Everyone Will Be Wiped Out In 30 Days" Jeremy Grantham's Last WARNING! - Must Video
Full Court Press Against The Deep State Started! Major Plays Happening! Deep State Is Failing! - Must Video
X22 Report: It’s Always Good To Be Underestimated! The Old Guard Is In The Process Of Being Destroyed! - Must Video
Oh Sh*t, in 24 Hours Everything Changes & Putin Is Ready! - Redacted News Live
Loading...
Featured
Spike Proteins in Covid Injections Compromise Not Only Current but All Future Pregnancies
Comparisons of U.S. Median Household Income Estimates
Through My Bible Yr 02 – September 27
Millions of Americans say NO to COVID shots, CDC data reveals
CDC used flawed reports to manipulate Americans throughout the COVID-19 pandemic
Fed Whistleblowers Say Communists Have Seized Control of FBI & DOJ! (Video)
Did You Know These Things About the Restricted Areas of National Parks? What Are They Hiding? (Video)
Whistleblowers Are Now Sabotaging Deep State Agenda! (Video)
Μost People Dοn't See What's Coming: Something Far Worse (Video)
FBI Whistleblower: The Enemy Within (Video)
Loading...
Top Global
Trudeau drops COVID Vaccine Mandate because 9 in every 10 Covid-19 Deaths have been among the Triple/Quadruple Vaccinated in the past 3 months
Max Igan – The Greatest Democide In History
Early-onset cancer on the rise around the world, new study suggests
My Promise To Trudeau / Face Diaper Study Showing Significantly Higher Mortality
FYI: The Elites AI and Robots Don’t Need You (Video)
In 72 Hours... Things Get REAL WEIRD! - Canadian Prepper
Simon Parkes, Phil Godlewski Latest Intel Highlights - God Bless All Patriots (Video)
Pure Bloods Assassinated By the Deep State?? Share Everywhere!! (Video)
New Dark Outpost: Satanic Bloodlines Of The Illuminati!
FBI Whistleblower: The Enemy Within (Video)
Top Alternative
TRANSFUSION CONFUSION: American Red Cross caught mixing vaxxed blood with unvaxxed blood
My Promise To Trudeau / Face Diaper Study Showing Significantly Higher Mortality
Deagle was exposing a thoroughly thought out plan which is only now coming into focus.
It Really Is This Simple
What Scientists Found in Russia Has Left People Speechless
FYI: The Elites AI and Robots Don’t Need You (Video)
Q Anon Braking trump: No One Receiving Eno
Meloni, the Woman King, peer reviewed UK data on the vaxx is not looking good: Links 2, September 26th, 2022
Trump update 09/26/2022..This is how past Presidents were treated on Documents. Compare to me. Big story - this nonsense should end, now. WITCH HUNT!
“The Head Wound” -Guess Who’s Back? The Complete Government Playbook-A (7) Year Timeline/No-One Can Refute It, Because We ALL Lived Through It! We Have All Of The Evidence!