Elite Jews created the Jewish God as their “egregore.”

According to Wikipedia, “egregore” is an occult concept representing a “thought form” or “collective group mind”, an autonomous psychic entity made up of, and influencing, the thoughts of a group of people. An egregore is born when a group of people concentrate with emotion on a single goal or objective. The emotional aspect is crucial; simply thinking about a goal does not have the same effect. The emotion and intent must be strong, focused and sustained.

Does the “egregore” explain the mysterious affinity, coordination and energy manifested by Illuminati (Satanist) Jews and their goyim (Freemason) partners?
from Oct 29, 2019
The New World Order Egregore
by Russ Winter
(henrymakow.com)
The British Empire represented a partnership between Jewish finance and the British aristocracy, according to Hilaire Belloc in his book “The Jews” (1922). And Belloc was right. What has since been dubbed the New World Order (NWO) is an extension of the British Empire in which elite British, American and Jewish imperial interests are indistinguishable.

Belloc writes: “Marriages began to take place, wholesale, between what had once been the aristocratic territorial families of this country and the Jewish commercial fortunes. After two generations of this, with the opening of the 20th century, those of the great territorial English families in which there was no Jewish blood was the exception.”

Given that the Jewish-British “egregore” is also behind the NWO, we should recall that — according to this mindset — only NWO “believers” are human, and everyone else is an animal to be exploited or slaughtered.

We are not going take a deep dive into this concept right now or fully explain it but rather aim to create a general awareness.

Egregore (also egregor) is an occult concept representing a “thought-form,” a “collective group-mind” or a “hive mind.” It’s an autonomous psychic entity made up of and influencing the thoughts of a group of people. In psychology, the Group Mind is definitely recognized as one of the factors to be reckoned with in treatment.

Egregore was of prominent interest in Jewish Kabbalah as well as the British-Israelism occult.

From the inner point of view, we may see it as a composite thought hive-mind charged with emotional energy. This energy is evoked from all those who are linked with the thought-form and, if there are those in the group who know something of the psychic mechanism involved, it can be directed upon any chosen target. It is obvious that such energy can be used for evil or control purposes.

Egregore derives from a Greek word meaning “watcher” — a thought-form created by will and visualization. A group egregore is the distinctive energy of a specific group of magicians who are working together, creating and building the same thought-form or energy-form.

Curiously, the word “watchers” derives from the Nephilem, also called watchers. In Hebrew, the word is ir, and the concept appears in “The Book of Enoch.” The Old Testament is filled with references to fallen angels, Nephilim (giants) and darker forces.

B”nei Elohim means Sons (plural) of God in Hebrew.  The Watchers (both good and bad) are a class of Angelic beings.  The bad Watchers came down from their previous estate and polluted mankind by mixing their seed with women producing the Nephilim (giants, mighty ones).  As such “Watchers” is not derived from Nephilim but from B’nei Elohim or Sons of God.

This egregore process is unconscious but is intensified through the initiation process, such as Skull and Bones, which is designed to open the mind to the spiritual through the egregore. Whether the group is organized to do good or evil, indoctrination can happen quickly.

As Gustav La Bon pointed out, reason is not part of the crowd mentality. Becoming caught up in the passionate hatred or love of an egregore can be hard to resist. An organized group with a very strong intention builds and maintains an egregore with its passion, and the thought form affects new initiates.

The power of the egregore to help and sustain a group increases over time through the repeated actions (ceremonies or rituals) of its members. The egregore can raise its members from the material and connect them to the divine or to the depths of human depravity. The Sabattean Frankists offer a prime example of the most dangerous egregore group of our times as is high level Freemasonry.

A small group can create an egregore, and that psychic energy can spread to the crowd who mindlessly follow. The crowd egregore arises quickly. Its passion carries the crowd. I would suggest that the false flags and staged deceptions we are being subjected to have the emotional charges to drive a group thought-form that can be manipulated.

A group intentionally setting out to create an egregore must have certain ingredients (Wikipedia).

An egregore is born when a group of people concentrate with emotion on a single goal or objective. The emotional aspect is crucial; simply thinking about a goal does not have the same effect. The emotion and intent must be strong, focused and sustained.
Secret societies, mystery schools, and political associations all have core teachings that are not shared with outsiders. Whether it is a privilege to know the secret, or the threat that disclosure will result in mortal harm, nothing tightens a relationship like a kept secret. Segregation – Sharing a secret makes the group separate, apart from the masses.
Special costumes, ceremonies, chants all add to the separateness and a sense of specialness. The distinction of them-versus-us focuses attention. Ritual – Special rituals invoke the entity of the egregore, but also stir the imagination of the participants. The power of the ritual, especially one conducted in secrecy, should not be underestimated. Rituals have been used throughout recorded history to invoke the unseen powers to operate on one’s behalf.
–
Makow – It seems to me that this “egregore” is driven by MONEY not belief.
Related – Cabalist Jews are their Own Egregore (God)
———– What is an Egregore?
First Comment by Paul S-
Your article on Egregore reminds me of the concept of a thought-form tulpa, or, expressed kabalistically, a golem. I’ve been doing a deep dive lately on the writings and legacy of the Maharal of Prague, the rabbi reputed to have invoked a golem on the streets of 16th century Prague, and a creature which some people claim still haunts the attic of the Alt-Neu Synagogue in the Czech capital city. 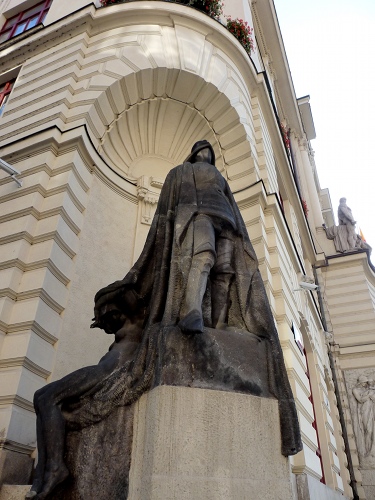 (Statue of Golem in Prague ghetto)

The Maharal is an often overlooked figure in NWO circles, but he is in effect the spiritual godfather of Chassidism, having essentially outlined and defined the basic structure of that sect. He is also the 7-degree grandfather of Shneur Zalman of Liadi, founder of the now-infamous Chabad Lubavitch. The Maharal also claimed a royal descent in the line of King David. And like the Maharal, Prague itself is also often overlooked in NWO circles — the gold-on-red flag of Prague’s Jewish quarter is, with only small modifications, basically identical to the old, famous sickle-and-hammer flag of the Soviet Union. Hitler also famously refused to touch or disturb the Prague ghetto in the slightest, and left the city’s Jewish Quarter completely intact (was he protecting someone, or something there?)

If you do a deep dive on the stories and legends surrounding the Prague Golem you’ll see that the stories didn’t really start to circulate until more than a century after the Maharal’s death, making it unlikely that the rabbi ever actually invoked such a “real life” monster. But what if the Prague Golem is just a metaphor for a real-like Jewish egregore, a clandestine secret society that meets (literally) in the attic of the Alt-Neu Synagogue, and which conducts such “egregoric” initiatory rites based on the teachings of the Maharal, and has been doing so for many centuries now, hence giving rise to the legends of a “golem” stalking the streets of Prague?