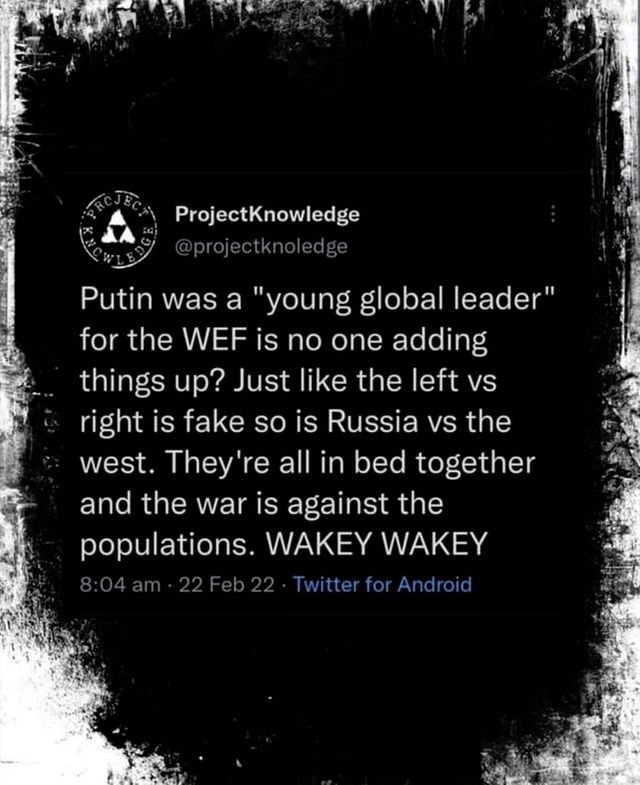 “There are some in the alternative media
and the liberty movement who falsely believe
that Russia is anti-globalist –
Nothing could be further from the truth”
“It’s important to understand that most conflicts between the East and the West are engineered conflicts and the leaders of BOTH SIDES are not really at odds with each other. Rather, these wars are Kabuki Theater; they are wars of convenience to achieve covert ends while mesmerizing the masses with moments of terror and calamity.“
“Ukraine is a Plan B attempt to conjure more smoke and mirrors where the covid pandemic failed to satisfy the Great Reset plan. If you look at the WEF and Gates Foundation simulation of a covid pandemic, Event 201 which was held only two months before the REAL THING happened, they clearly expected covid to do way more damage, predicting an initial death tally of 65 million. This never happened; it isn’t even close.“
Order out of Chaos – How the Ukraine Conflict is Designed to Benefit Globalists
By Brandon Smith
(excerpt by henrymakow.com)
As with many political leaders Putin will sometimes use anti-globalists rhetoric, but his relationships tell another story. In Putin’s first autobiography, titled ‘First Person’, he discusses with fondness his first encounter with New World Order globalist Henry Kissinger as a member of the FSB (formerly the KGB).
As Putin rose through the political ranks he maintained a steady friendship with Kissinger and to this day they have regular lunches and Kissinger has been an adviser to multiple branches of the Kremlin.

It doesn’t stop there, though. Putin and the Kremlin have also kept a steady dialogue with the World Economic Forum, the project of the now notorious globalist Klaus Schwab. In fact, only last year Russia announced it was joining the WEF’s “Fourth Industrial Revolution Network” which focuses on economic socialization, Artificial Intelligence, the “internet of things” and a host of other globalist interests which will all lead to worldwide technocracy and tyranny.

Again, the Russian government is NOT anti-globalist. This claim is nonsense and always has been. I would attribute the fantasy of Russian opposition to a steady stream of propaganda and what I call the False East/West Paradigm – The fraudulent notion that the globalist agenda is a purely Western or American agenda and that countries like China and Russia are opposed to it. If you look at the close interactions between the east and the globalists, this idea completely falls apart.

It’s important to understand that most conflicts between the East and the West are engineered conflicts and the leaders of BOTH SIDES are not really at odds with each other. Rather, these wars are Kabuki Theater; they are wars of convenience to achieve covert ends while mesmerizing the masses with moments of terror and calamity.

For anyone who has doubts about this, I highly recommend they read the thoroughly researched and evidenced works of professional historian and economist Antony Sutton, who quite accidentally stumbled onto the facts surrounding the globalist conspiracy and went on to expose their habit of playing both sides of nearly every war over the past century from the Bolshevik Revolution to WWII and onward.

SO WHAT DO THEY GET OUT OF IT?

As I have noted in recent articles, it appears to me that Ukraine is a Plan B attempt to conjure more smoke and mirrors where the covid pandemic failed to satisfy the Great Reset plan. If you look at the WEF and Gates Foundation simulation of a covid pandemic, Event 201 which was held only two months before the REAL THING happened, they clearly expected covid to do way more damage, predicting an initial death tally of 65 million. This never happened; it isn’t even close. 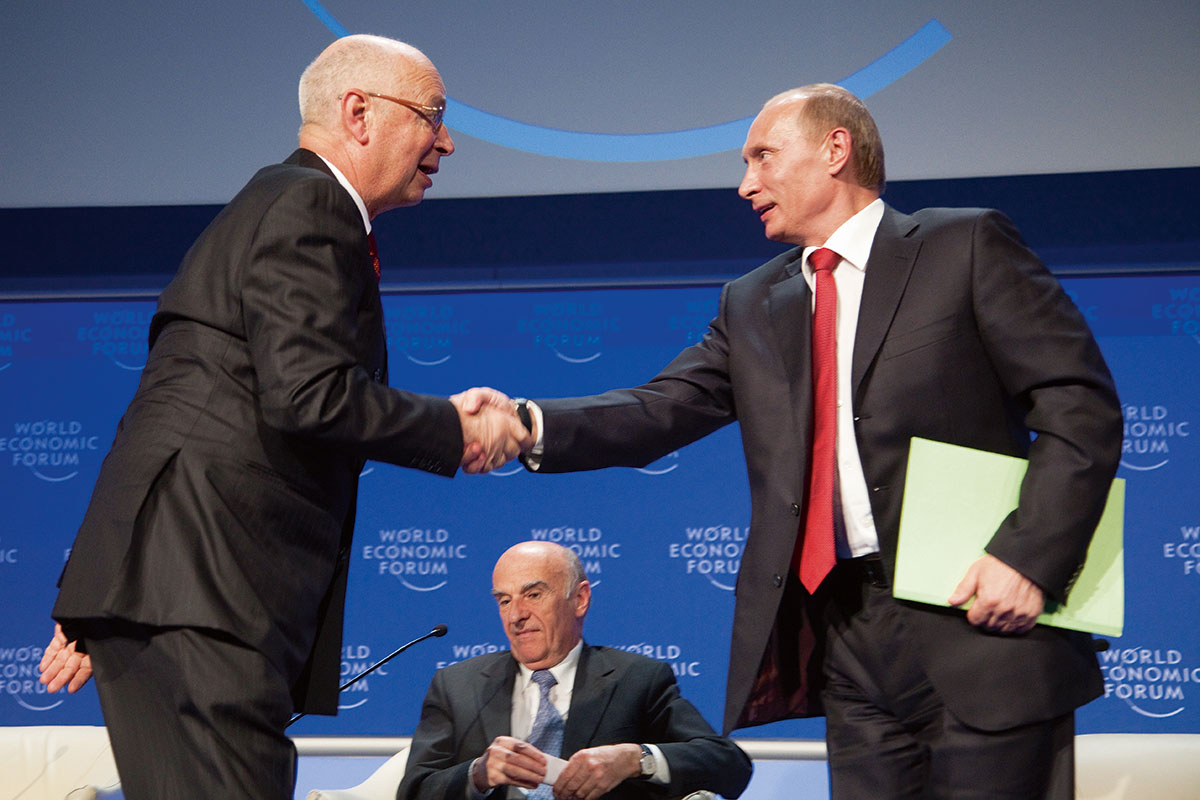 It’s hard to say why an obvious bioweapon like covid failed to do the job. Viruses tend to mutate rapidly in the wild and behave differently than they do in a lab setting. I would even consider the possibility of divine intervention. Whatever the reason, the globalists did not get what they wanted and now they need yet another crisis to oil the gears of the Reset machine. With the already tiny death rate of covid now dropping even further with the Omicron variant and half the states of the US in full defiance of the vax mandates it is only a matter of time before the rest of the world asks why they are still under medical authoritarianism?

War in Ukraine and the mere threat of that war expanding beyond the region could accomplish a number of things covid has not.

It provides an ongoing cover for the stagflationary collapse which is now in full swing in the US, the supply chain problems that continue globally as well as the destabilization of the European economy.
In particular, the EU is strongly reliant on Russian natural gas in order to heat homes and maintain its economy. Russia has strangled natural gas supplies to Europe in the past and they will do it again. Russian oil exports also fill demand gaps globally, and these exports will be strangled by sanctions or by the Kremlin deliberately cutting supplies to certain nations.

War is always a distraction from economic sabotage. Even though the seeds of financial crashes are often planted and watered well in advance by central banks, the banks never get the blame because international conflicts conveniently take center stage. By extension, economic crisis causes mass poverty, mass desperation, and mass hysteria, and globalists will say that these dangers require an international solution that they will happily provide in the form of centralization.

In the US and in many other western nations which have a large number of people still defending individual freedom, the globalists clearly want to use tensions with Russia as a means to silence public dissent over authoritarian policies. Already I am seeing numerous instances of establishment officials and leftists on social media suggesting that liberty activists are “pawns of the Russians” and that we are being used to “divide and conquer.” This is nonsense backed by nothing, but they are trying out the narrative anyway to see if it sticks.

I have no doubt that any rebellion in the US against the globalists will be blamed on foreign interference. As mentioned earlier, the last thing the elites want is movements of free people obstructing the Reset in the name of liberty. We witnessed this in Canada where Trudeau announced unilateral emergency powers against the trucker protests, giving himself totalitarian levels of control. Even the Russian government has intervened in such public actions to prevent any kind of activist momentum. Biden will try to do the same thing, and war, even a smaller regional war, gives him a rationale to oppress dissent in the name of public security.

Interestingly, martial law in the US is also much easier to legally and historically justify for the government as long as it is done in response to the invasion of a foreign enemy. The Russian influence narrative may very well be in preparation for martial law within America. Whether or not this actually succeeds is another matter.

The consequences of a shooting event in Ukraine will be far reaching well beyond a distraction for the American public; my intent here is not to suggest only Americans will be affected. My point is that there are certain places in the world that are naturally resistant to the globalist scheme, and freedom minded Americans are a primary obstacle. If there is a large scale rebellion against the Great Reset, it’s going to start here. The globalists know this as well, which is why the US will undoubtedly be centrally involved in the Ukraine quagmire.

While the event would be disastrous for Ukrainians and probably many Russians, there are deeper and more dangerous underlying threats intended for the US and a war in Ukraine acts as an effective scapegoat for many of them.
——————-