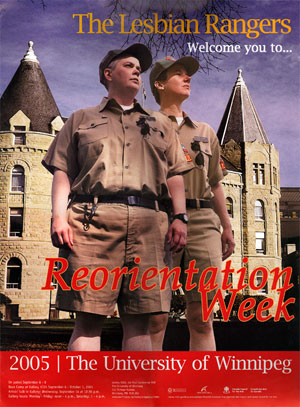 When this article first appeared in 2005, we didn’t realize it described the start of an official government policy to foist lesbianism, a developmental disorder, on unsuspecting youth. In 17 short years, the campaign to cause gender dysfunction has reach the point of transgenderism.

This article shows how even lesbians admit it is caused by family dysfunction.

This is the equivalent of the university and government hiring two middle-aged males to meet virgins, go camping and initiate them.

University students continue to face a bizarre government campaign to make them homosexuals, part of the Masonic banker attack on marriage, family and the birth rate.

At the University of Winnipeg, co-eds were invited to participate in a lesbian “Reorientation Week.”

They were asked to become “rangers” with the “Lesbian National Parks and Services,” the brainchild of local “performing artists” Shauna Dempsey and Lorri Millan. (See Poster)

This is the equivalent of the university and government hiring two middle-aged males to meet co-eds, go camping and have sex.

The two womyn had a “field office” in the university art gallery staffed by a university employee in ranger uniform. They took part in pancake breakfasts, barbecues and interviews on campus radio.

“Lesbian Rangers salute and welcome you!” their brochure said. “Here you will encounter new, even life-changing lifestyles and ideas. These may challenge you in uncomfortable ways.”

The university art gallery, the Manitoba Arts Council and the Canada Council, sponsored this obscene attack to the tune of about $10,000. This doesn’t include thousands of taxpayer dollars already expended on their promotional video and “Field Guide” which includes examples of lesbian “flora and fauna.”

When I went to university, students learned to question authority. Today, they learn to question their gender.

Does the LNPS actually exist? This is social engineering masquerading as art, propaganda disguised as parody. It is a shock tactic. Eventually the outrageous becomes accepted. Often, what happens in the imagination occurs in reality.

The Lesbian Rangers don’t actually work in any parks. But the artists claim to have hundreds of junior members called “Eager Beavers.”

Their video (online) is full of such double entendres and sexual innuendo. The two “bush women” leave “no stone or lesbian unturned.” It’s a “lesbian-eat-lesbian-world.” Knots are practiced in various bondage positions. Their website is called www.fingerinthe dyke.ca

Yet, in the video, they fine a heterosexual male $100 for wearing a lewd T-shirt (“Blow me”) and intimidate him when he protests. He is reprimanded for “threatening the lesbian environment.” Rangers are urged to make “citizen’s arrests.”

In the video, they “rescue” a straight female from drowning. She is enchanted by her hairy-legged saviors and “sees the world through brand new eyes.”

If the University of Winnipeg is an indication, universities are playgrounds for lesbianism. It makes sense. Enrollment is already 2-1 female.

The following year, the “Womyn’s Center” sponsored an event where co-eds had casts made of their breasts! Imagine if heterosexual male students sponsored such an event.

Each February, the gay-dominated student council sponsors a “Question Your Gender” week.

The “Sexual Harassment Officer” stated that the university takes a grim view if only one student is made “uncomfortable.” Apparently this rule only applies to the discomfort of feminists, gays and lesbians. The claim of “victimhood” masks an aggressive destructive ideology.

WHY IS THIS HAPPENING?

Lesbian activists are funded by the Illuminati bankers to depopulate and destabilize society in advance of “world government.” Their message is that lesbianism is not a developmental disorder but a natural alternative for women. 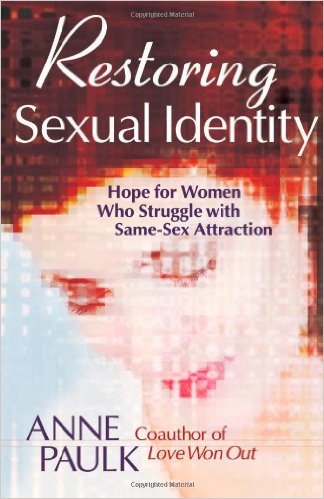 Unfortunately, many ex-lesbians disagree. In her book, “Restoring Sexual Identity“ Anne Paulk surveyed 265 ex-lesbians like herself and conducted numerous personal interviews. She found that,  ”same-sex attraction is seldom really driven by sexual needs; it is driven by an unconscious desire to be loved and to trust another person. It is also frequently driven by a desire to reconnect with the feminine but in the wrong way.”

“Childhood trauma, poor self-image, anger at men, poor relationships with either or both parents, and pro-homosexual media propaganda are several key elements in women developing an attraction to other women.”

In… the “classic development of lesbian attraction,” Paulk discovered that these women had … domineering, critical, detached, or weak mother; and/or … a father who was detached, critical or abusive.”

“In many cases, the mother was viewed as weak or was cruelly dominated by her husband. Seventy-five percent of the women viewed the male as a more favorable role model for their lives–with a rejection of their own gender and pursuit of male characteristics.”

“An astounding 90 percent experienced some form of abuse themselves. This abuse was not just sexual but included emotional abuse (70 percent), sexual (more than 60 percent), and verbal abuse (more than half of those surveyed.) “

As far as I could tell, University of Winnipeg students mostly avoided the Lesbian Rangers. But there are many feminist or lesbian professors who are harder to avoid. They make their dogma of male oppression of women (i.e. divide-and-conquer) a prerequisite for a passing grade.

Let’s not mince words. Orwell’s “1984″ has arrived. The government and universities are foisting a developmental disorder caused by dysfunctional families on our children.

Dempsey and Millin try to be campy and nice but they are really obnoxious hypocrites. Like fellow lesbian Irshad Manji, they are New World Order “change agents,” cultural agitators highly paid to subvert the young. Destruction of the family is a main tenet of the Illuminati’s Communist Manifesto.

The LNPS motto is “Treat a Lesbian as you would like a Lesbian to Treat You.” I ask them, do they want to be treated like they are treating straights? What if straight society launched a comparable campaign teaching them that their deepest life desires are not natural but a “social construct”? Can you imagine the cries of homophobia?

It’s ironic that they refer to lesbians as an endangered species.

Heterosexuals are the real endangered species. They are the ones who conceive and nurture the young in nuclear families. And when they disappear, so will the human race as we know it.