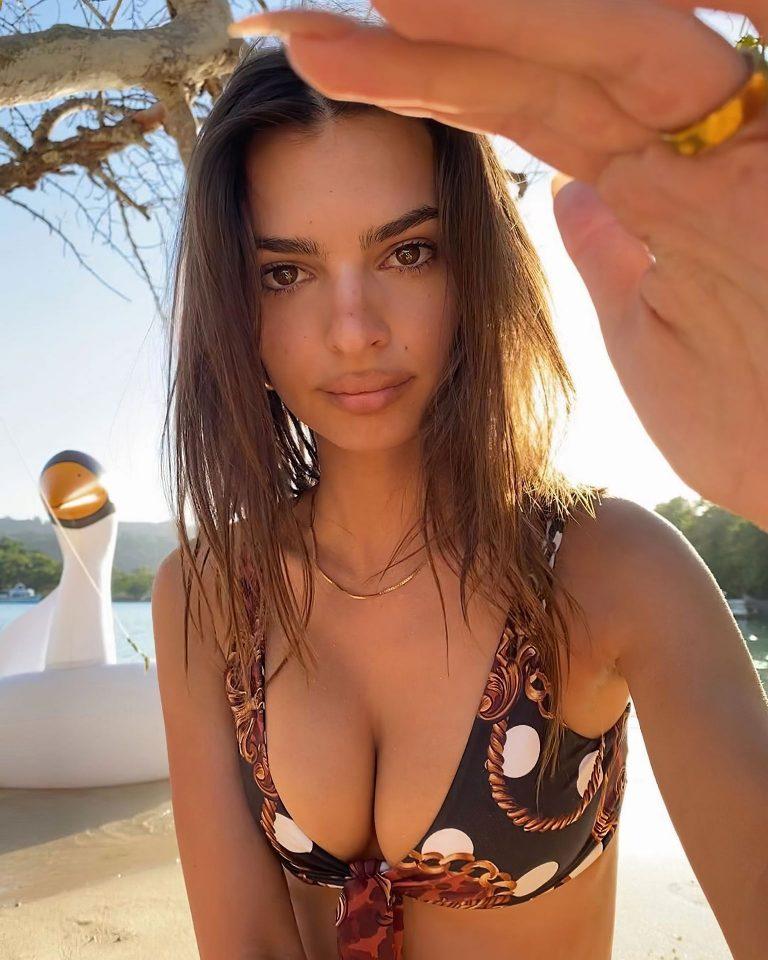 “I don’t understand why we continue to blame women for men’s mistakes,” Emily Ratajkowski, left,said. “Especially when you’re talking about 20-something-year-old women dealing with men in positions of power who are twice their age.”

“People appear to keep conveniently forgetting:  Young girls and women are extremely vulnerable to getting oxytocin bonded, which is like being heroine addicted after sexual intimacy with a man. Oxytocin is released in intimacy, in which females lose their rational minds…its hard for them to be logical.”
“Women have become pretty bitter about being used sexually –the backlash is onlyfans and sugar daddy. “The sentiment is “OK you won’t marry us and take care of us –then we will just be sluts.”
by Jennifer (henrymakow.com)
I agree with Emily Ratajkowski. We have to stop blaming young women for predatory older rich influential men manipulating young women into sexual relationships that destroy them as future wives and mothers for good men.

Here’s the dynamic. So often I see men applauding and giving accolades to powerful men, who can bed  young beautiful women–then toss them aside and go to the next.  Where are the men who say this is not right? I won’t want this happening to my daughter?

People appear to keep conveniently forgetting:  Young girls and women are extremely vulnerable to getting oxytocin bonded, which is like being heroine addicted after sexual intimacy with a man. Oxytocin is released in intimacy, in which females lose their rational minds…its hard for them to be logical.
In this drugged-out state, should they be held accountable for their actions?  Further, studies show a component of this oxytocin “love addiction” creates strong trust with the man they were intimate with.  And intimacy does not necessarily have to include intercourse, kissing can trigger the same oxytocin bonding in young females.
Oxytocin bonding is stronger in high estrogen women. High estrogen women are identified by beauty. Classic universal beauty is indicative of high estrogen. Thus high estrogen = high levels of oxytocin, which makes beautiful women much more vulnerable to becoming uncontrollably love addicted to a man and they also have an unrealistic trust with that man that he will do the right thing.

If he’s married, they trust he is getting a divorce to marry them. Oxytocin-bonded women are completely irrationally in love. And men, who understand this oxytocin aspect in young beautiful women take full advantage of it.

Males DO NOT have the same oxytocin bonding as females because it’s related to levels of estrogen in the body.  So, sure males have some estrogen –but nothing compared to the levels in young females.

Further to note, ugly women are low estrogen and low oxytocin bonders –ugly women don’t fall in love chemically to the same extent that beautiful women do.  They don’t understand what is happening to beautiful women –but they often act extremely jealous and heartless towards the vulnerability and real suffering of beautiful women.

I know I’m a beautiful woman. When I was younger I had no idea what was happening to me–why was I so in LOVE with a man, who treated me badly and I could not walk away ??? I wish I had understood my vulnerability –I would have protected myself –Society used to understand this and protect girls –what happened?

I’m sure Ms Sumner doesn’t understand her own oxytocin bonding –she denies she was hurt–a  victim.  Yet, her soul has been damaged and she does not realize how it will negatively affect her future relationships…. Hopefully, she can get educated about what is happening to her body-mind-soul via  oxytocin bonding.  If not, she may never truly understand her feelings and actions and ultimately heal.

The phenomena of oxytocin bonding has been known for decades but people continue to ignore it in the conversation with young girls and women as a contributing factor in their illogical behaviors regarding sexual intimacy with men. Especially predatory men like Jeffery Epstein, Harvey Weinstein etc etc….

And they ignore the fallout it has on making older women nuts, such that they become anti-depressant addicted.

SOLUTION: Men need to stop congratulating their men friends, who score with young hot chicks and instead call them out– and demand men respect and honor women’s sexuality as sacred and something that needs to be protected for a healthy functioning society. Men need to stop condoning porn-culture and understand its toxic effects.  If men can get men in line to be real men again, who protect women and children’s sexuality our civilization can be saved from the brink of disaster!

I’m seeing a lot of beautiful young women selling themselves on only fans and sugar daddy and feeling good about it. If you look at youtube.com “shorts” there’s interviews with young women who claim to have six figure bank accounts thanks to “sugar daddies” whom they boast of exploiting.
Jennifer replied-
These beautiful young women, ages 15 to 25 are just as vulnerable to being swept up into the corrupt fray. They are getting applauded –accolades for being on “fans only” and “sugar daddies.”

No one is giving them props for being a good girl–all around them society is telling them to be a slut.

Generally, young men their age won’t marry them — only a small percentage of men in the 26-plus age will marry them.

But many men will use them, pretend they want to marry them only for them later to discover they were lied to and used sexually.

Women have become pretty bitter about being used sexually –the backlash is fans only and sugar daddy.

The sentiment is “OK you won’t marry us and take care of us –then we will just be sluts.”

I remember a man I knew in the early 1990s, who had gone to Russia and he said that the economic problems in Russia forces their beautiful women to become whores–selling their bodies to make ends meet.

After the first few waves of feminists opened the doors to women in the work world…. Men just expected the extra sex-kickbacks with the job.  But the next generation of feminists women– who walked into those hard won doors by their predecessors –were not going to put out by and large –But the old guard men had come to expect it –that’s where the whole #MeToo Movement hit the pavement.

This current generation of feminists are saying, “No” to quid pro sex unlike their mothers, who –yes put out.

—-
Makow comment — Cornelia Otis Skinner said “woman’s virtue is man’s greatest invention.” Another wag said, “People only learn what they’ve been taught.” Our society is a satanic sex cult. Men have become addicted to sex. Young women sell the only thing of value they have. The only way for men and women to avoid this trap is to reserve sex for marriage or a marriage-like relationship. The only way for men and women to evolve personally is to devote themselves to a profession that ennobles them.