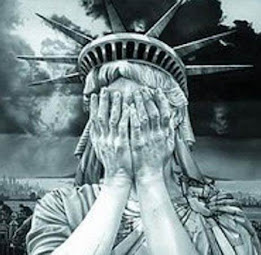 For conservative Americans, the past couple of months have been devastating. George Parry blogs at Knowledgeisgood, and his posting from January 1 struck a chord.  He begins:

Beware of the Thing That Is Coming

A number of you have kindly inquired as to why I have recently been absent from these pages. The reason is that, since early November, the only matter worth discussing has been the outright theft of the 2020 presidential election, and, as will be explained below, I have been emotionally and intellectually  unable to rationally address the topic.

President Trump won re-election by an historic landslide. He has been denied his rightful victory by means of corrupted voting machines and the massive use of unverified and unverifiable mail in ballots. I won’t go into the details since I would just be repeating all the depressing and alarming facts with which I am sure you are already familiar. But, watching events unfold, it has become apparent that there was nothing subtle about the theft. It has been the electoral equivalent of an in-your-face smash and grab robbery – as in, yeah, we stole the election and there’s nothing you can do about it.

On the emotional side, I have been too angry to write coherently about the theft and what it will mean for the future of this country. The consequences of the theft extend far beyond the fate of President Trump. Those who conspired to steal the election now have in place the tools to oppress the majority. Think of the massive demonstrations in Venezuela by the majority who oppose the Maduro dictatorship. The masses may demonstrate and protest, but so what?  Maduro and his thugs remain in control and will continue to “win” elections into perpetuity using the same voting machines and software now being used (in conjunction with fake mail in ballots) to deprive Trump of victory.

Will the majority in America suffer the same fate as its counterpart in Venezuela? If Trump, who won a huge landslide, can be cheated out of victory, what chance will lesser candidates have in the future?