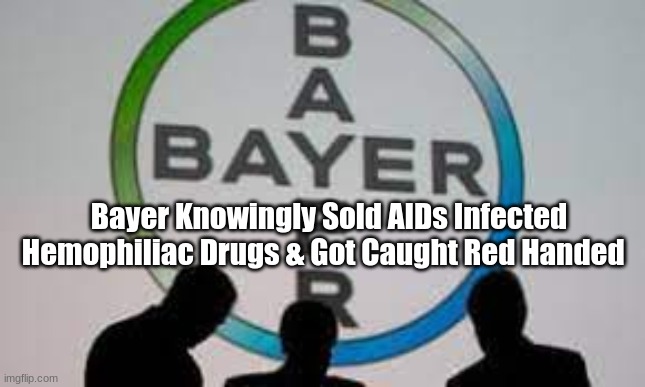 An old story but relevant today, as we see how they are handing the other toxic drugs they push.

These bastards (drug companies) have been killing for profit for a long time:

A division of the German pharmaceutical company Bayer knowingly sold blood-clotting agents infected with HIV to Asia and Latin America months after withdrawing them from Europe and the US, an American newspaper claimed yesterday.

Cutter Biological continued to dump stocks of the factor VIII blood-clotting agent for hemophiliacs on poor countries for nearly a year after introducing a safer alternative, the report in the New York Times said.

It happened in the early 80s, after the Centres for Disease Control in Atlanta, Georgia, reported in July 1982 that hemophiliacs were becoming ill from blood products.

Up to that time factor VIII, produced from the plasma of about 10,000 donors, was not screened for HIV, and it became a leading killer of hemophiliacs in the early years of Aids. Bayer, paid out $600 million to settle lawsuits brought by thousands of American hemophiliacs.