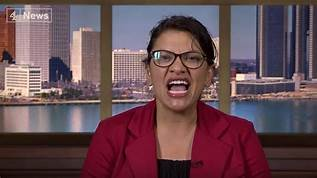 “From the river to the sea, Palestine will be free”

As is always the case with controversial people, Congresswoman Rashida Tlaib (D-MI) has been in the news a lot lately. No, she didn’t call President Trump a “motherf—–” (at least, not that I know of). Tlaib raised eyebrows just days ago when it was revealed that she was slated to appear December 15 on a virtual panel with three other controversial individuals-Israel haters all- to discuss the topic of anti-Semitism.

Julius Streicher and Hitler were unavailable. 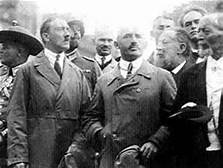 “From the Oder to the Rhine, Germany will be Judenrein”

Of course, people like Tlaib and her ilk have their own slant on what anti-Semitism is all about. Tlaib, of course, denies that she is anti-Jewish; after all, being of Palestinian stock, how could she possibly be?

If Tlaib’s inclusion on such a panel on anti-Semitism wasn’t ironic enough, she managed to underline the hypocrisy when she re-tweeted a cute little jingle on the occasion of Palestinian-Something Day (November 29). The jingle goes like this:

“From the river to the sea, Palestine will be free“.

If you haven’t been on a college campus lately, the meaning is simple: From the Jordan River to the Mediterranean Sea, Palestine will be free. Those are the borders of Israel. It means that there will be no more Israel and no more Jews. Only a state called Palestine made up of and run by Palestinians. Oh, people like Tlaib might tell you that such a state could also include Jews in a multi-ethnic society, but we all know that if they were not driven out or slaughtered, they would be forced to live as minority dhimmis under the thumb of the Palestinians. Tlaib knows exactly what it means.

In November, the voters of her district in Michigan, which includes parts of Detroit and Dearborn, had the chance to correct their mistake of 2018 and vote Tlaib out on her can. That they chose to re-elect her says tons about this district.