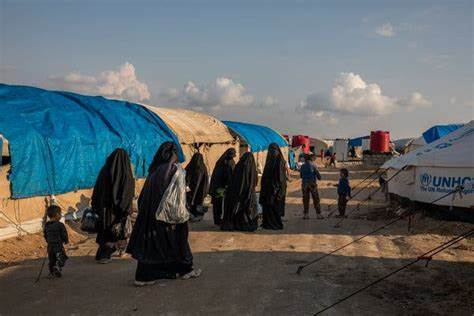 France, like many other Western countries, is grappling with the question of repatriating women of children who left the country to join their jihadist husbands/fathers who had gone to Syria to join and fight with ISIS. Now the European Court of Human Rights has condemned France in the case of two families who had unsuccessfully petitioned to have their women and children brought back to France.

The below article from the French daily, Le Monde, is translated by Fousesquawk.

Repatriation of families of jihadists: The grounds for the condemnation of France by  European Court of Human Rights

Paris will now have to justify any refusals to repatriate the wives and children of jihadists detained in Syria. Their next-of-kin will be able to lodge appeals before an independent organization or a court.

Wives and children waiting to be registered during an anti-terrorist operation at the Al Hol camp (Syria) on 12 September 2022.

The European Court of Human Rights on Wednesday, September 14, condemned France for not having justified the non-repatriation of two wives of jihadists and their children, whose next-of-kin had lodged two requests before the European court based in Strasbourg, on May 6,  2019 and October 7, 2020.

This is a setback for the French state, which up to now, has repatriated families of jihadists on “a case-by-case basis” at its discretion without any transparency. However, the decision of the ECHR, adopted by a 14-3 vote, does not guarantee a “general right to repatriation” for the wives and children held in the NE Syrian camps.

The two applications had been submitted in the name of H. F. and M.F. as well as J.D. and A.D., two families who had requested in vain to Paris for the repatriation of their relatives, before resolving to turn to the European court, considering that their girls and small children were exposed to “inhuman and degrading” treatment in the Syrian camps.