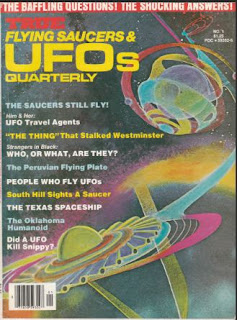 This Number One issue of True magazine’s UFO magazine  [1978] has a story on the MIB. (Page 24) and a piece by the lauded Coral Lorenzen: 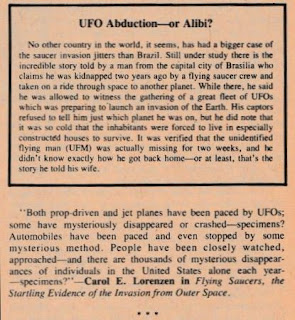 The “Strangers in Black” article (unsigned) provides description and information that is uncluttered by accretions that have crept into the MIB myth over the years.

A good source for MIB information is found in several books by Nick Redfern.
The kidnapping article, oriented around Coral Lorenzen’s approach to alleged kidnappings within UFO lore, has several tales starting with the Charlemagne era in France [742-814 A.D.], fleshed out with some accounts in the 1800s and early 1900s. 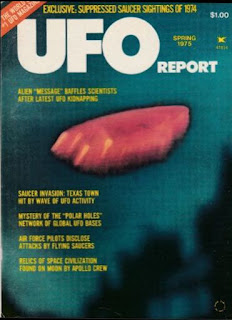 Then I found, in the UFO Report issue (pictured) another UFO fascinating kidnapping story by my pal Kevin Randle (Page 15).

It took place in 1973, involving a man named Dionisio Lianca in Argentina.
Lianca, while driving a truck (his job) one night, stopped to change a flat tire, was paralyzed by a blue light emanating from a dome-topped disc, that had three creatures — two male and one female — with “long, blond hair and elongated eyes, wearing one-piece, silver flying suits with high boots, gloves extended up their arms, and no belts, weapons, or helmets.”
“They talked among themselves … in voices that sounded like a badly tuned radio full of chirps, buzzes, and static.”
A black box was put on his left index finger and he fainted, waking up the next morning, cold and wet, lying in deep grass.
Found by a passing motorist, taken to a hospital, and ultimately subjected to hypnosis and drugs, during which he, once, spoke, in a robotic voice, indicating he had “a message from the beings in the craft.”
The message never was forthcoming apparently, and the episode has disappeared in the great maw of UFO lore that has accumulated in magazines and books that rarely see the light of today.
RR